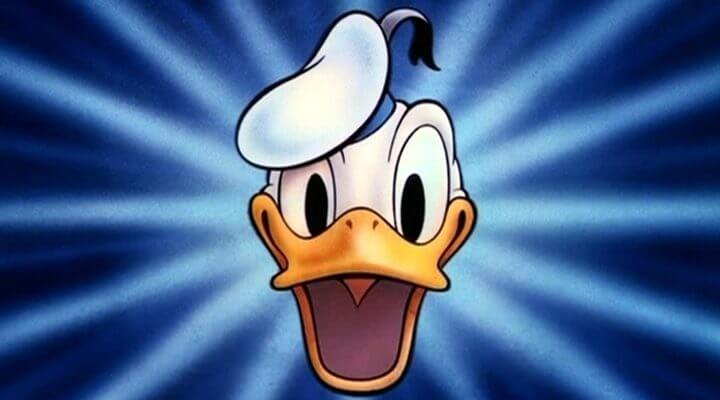 Ever since his first appearance in the 1934 Walt Disney Cartoon, “The Wise Little Hen,” Donald Duck has been entertaining fans with his animated antics.  He’s one of the infamous Fab Five of Disney iconic cartoon characters, along with his gal Daisy, Mickey, Minnie, and Goofy.

Almost a star on its own, the classic Donald Duck temper tantrum surfaced in “Orphan’s Benefit” and has been an Achilles’ Heel for the adorable drake ever since.

Compiled here, as a feather to tickle your funny bone are 10 temper tantrum toting toons featuring the loveable Donald Duck.

This 1939 cartoon is doubly delightful for the host of 1930’s movie stars making cameo appearances throughout the silly short.

In 1938 Donald finds himself torn between doing the right thing or giving in to temptation.  The angel and devil incarnations of Donald’s imagination are a fun application of the good vs evil in the form of “Conscience” (angel) and “Anti-Conscience” (devil).”

A wonderful depiction of Friday the 13th superstitions and the misfortune they may bring.  This classic Donald Duck cartoon from 1939 is the bomb!

Jack Hannah directed this 1944 Donald Duck cartoon. Ready for a relaxing day of golf, Donald’s plans are thwarted by the Florida-like weather (yes, the rain storms in FL are just about as fickle). Forced to stay indoors, his plans for enjoying the day are further fractured by the antics of his nephews.

5. “How to Have an Accident in the Home”

Similar in style to the Goofy “How to” cartoons this 1956 cartoon is an amusing anecdote on home safety narrated by J.J. Fate himself.  Poor Donald discovers just how much can really go wrong inside the presumed safety of his ordinary home in an ordinary neighborhood.

Released in 1961, this Disney animated short addresses a growing problem in the world: Litter.  Using Donald Duck as the vehicle, this environmental message still resonates today.  Of note – this was the final of the “classic” Donald Duck short cartoons to be produced by Disney.

A new home for Donald also means new neighbors.  Pete, a regular in the realm of Disney villains, takes on the role of the annoying guy next door.  After one too many inconsiderate action Donald and Pete go to battle.  Fueled by the “advice” and encouragement of other neighbors the two soon spiral out of control.

A Halloween classic, this 1952 cartoon again pits Donald against his nephews.  The tricks, instead of treats, that Uncle Donald taunt Huey, Dewy and Louie with earn the nephews’ sympathy and assistance from Witch Hazel.  Thick headed Donald does not easily learn his lesson.

When a small bird tries to gather items for his nest, the new paint job on Donald’s car is ruined.  Donald’s temper takes over as the bird walks over the wet paint again and again.

Sleep is hard to come by for the poor Donald, who has been driving all night.  Forced to break out his inflatable mattress while on the side of the road, Donald encounters a series of misfortunes, including slumbering next a large fish at the bottom of the river.

Whether misfortune or jealousy, as Mr. Duck has been second fiddle to his pal Mickey Mouse, Donald’s temper is legendary.  It can be seen in just about every time the classic Disney character makes an appearance.  From his attempts to upstage Mickey in the Mickey Mouse Club theme song to the 10 toons featured above, Donald Duck’s short fuse rarely fails to amuse.

Do you have a favorite Donald Duck cartoon or appearance?  Please share your temper tantrum filled tale in the comments below.