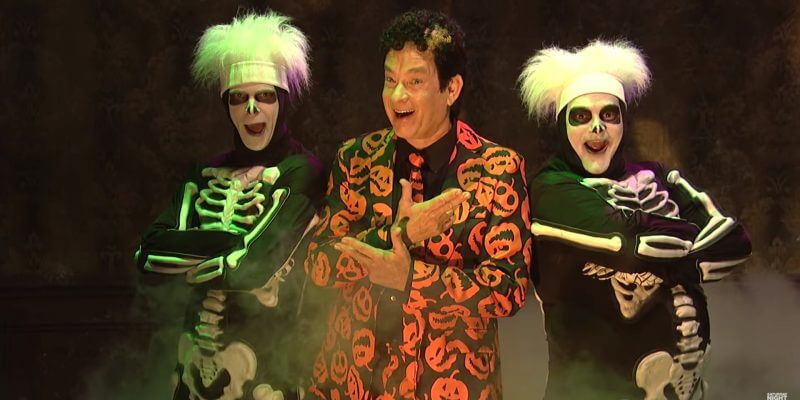 It’s difficult to predict which “Saturday Night Live” sketches are going to strike a chord with the long-running comedy show’s audience, let alone go viral, but “Haunted Elevator” from last Halloween definitely counts among them.

The four-and-a-half-minute scene featured a Twilight Zone Tower of Terror-esque theme park attraction set in a spooky elevator, but each time the doors open, a different creepy character emerges and spooks the couple on board. The enigmatic Jack O’Lantern-suited David S. Pumpkins (played by everyone’s favorite everyman Tom Hanks) then pops up, only to confuse and befuddle the riders.

The sketch caught on very quickly thanks to YouTube and internet word-of-mouth, and David S. Pumpkins soon became a popular meme on social media. And today on Twitter, Tom Hanks teased his return.

It’s not clear when exactly we’ll see David Pumpkins back in action– Hanks isn’t scheduled as host of the “Saturday Night Live” season premiere on September 30th (that’d be Ryan Gosling), but obviously they’ve got several weeks to go after that to squeeze the “Toy Story” star in before Halloween.

It’s also possible that Hanks is pre-taping a Pumpkins video as a non-hosting guest appearance for an upcoming episode, and decided to give fans a taste by tweeting out the final page of the script. Only time will tell. Any questions?