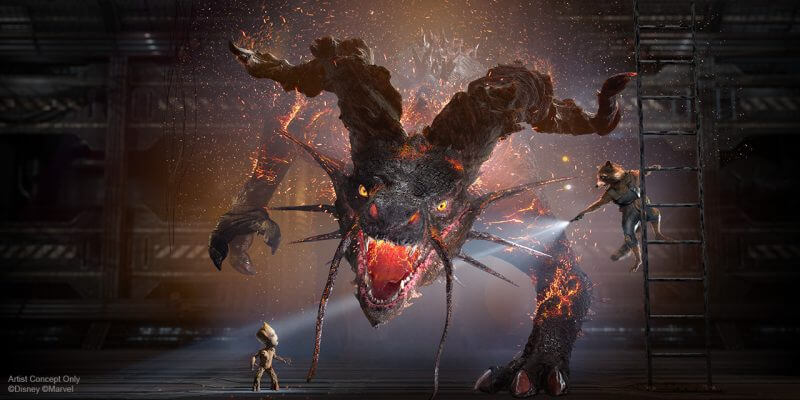 As we’ve seen plenty evidence of recently, Halloween fans have plenty to look forward to at Disneyland Resort this season. Back in August, Disney California Adventure revealed that its newly-opened Guardians of the Galaxy – Mission: BREAKOUT! attraction would feature a Halloween Time overlay entitled “Monsters After Dark,” which will be set immediately after the events of the usual ride.

Today, Disney revealed the first image from the new story, which involves Rocket Raccoon returning to the Collector’s Fortress– after the Guardians of the Galaxy have escaped– to rescue his little buddy Baby Groot. Along the way the adventurous pair encounter Surtur’s Fire Dragon, a character straight out of the Norse Mythology-inspired world of Marvel Comics. Check out the artist’s rendering below. “Guardians of the Galaxy – Monsters After Dark” opens tomorrow evening, September 15th at Disney California Adventure, and runs each night throughout the Halloween season. The standard version of Mission: BREAKOUT! will also be available during daytime hours. For more on Halloween around the Disneyland Resort, be sure to visit some of our other coverage.

Comments Off on PHOTO: First look at “Guardians of the Galaxy – Monsters After Dark” Halloween overlay at Disneyland Resort