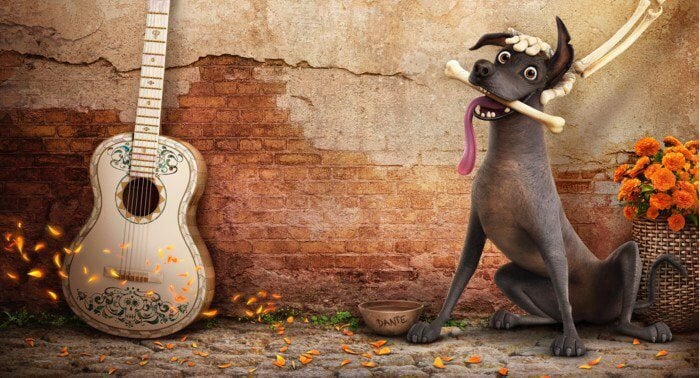 Disney’s animated films– even those produced under their more recently-acquired subsidiary Pixar Animation Studios– have a reputation for including unforgettably adorable animal characters. From the forest fauna in “Snow White and the Seven Dwarfs” all the way down to the rats in “Ratatouille,” cuddly creatures have populated both Disney and Pixar’s features from the very beginning.

Dante, the scrappy sidekick from Disney-Pixar’s next offering “Coco” (coming this fall) is maybe just a little less adorable on the outside due to his rough-and-tumble street dog background, but in terms of loyal spirit, he continues the tradition impeccably.

During my visit to Pixar’s headquarters in Emeryville, California last month, I learned all about Dante from “Coco” character supervisor Christian Hoffman, and found out how the team at Pixar set about creating the memorable mutt.

“Dante is Miguel’s trusted partner on his journey into the Land of the Dead. [Xoloitzcuintli] is the name of the breed of dog that Dante is. You could shorten this to ‘Xolo.’ They’re name after the Aztec god [Xolotl] and the Aztec word for dog. These are ancient dogs, so they’re referenced as far back as 3,500 years ago. They’re native to Mexico and Central America.”

“They safeguard the home from evil spirits and intruders. They’re also said to have healing powers. The heat from their bodies is commonly used to soothe arthritis and other ailments. They’re basically big, snuggly hot water [bottles]. They also are said to have served as guides for the dead as they transition from this world into the next.”

“Our exploration into Dante starts with art. [The character designers will] just do a bunch of drawings, trying to figure out what the character is. [Then they] start to zero in a little bit on the design, [it will] start to look like him. In addition, they also start to play around with his personality a little bit.”

“Art will continue to progress on the character, capturing the form, the shading on him, the groom, and everything. While this is going on, we’ll try to get some inspiration as well. So we’ll look at some animated dogs– in this case, dogs that we used on ‘Up.’ We [also looked] at some of the stuff that ‘Bolt’ was doing, and also some of the Disney 2D stuff is really great. ‘Lady and the Tramp’ had a lot of great stuff as far as movement and form for dogs. But there’s one big difference here: all of these dogs have hair, and Dante is hairless.”

“‘Hairless’ doesn’t necessarily mean they don’t have [any] hair. These dogs are considered hairless, but they’re not quite hairless. For Dante’s groom, the inspiration for us was that [the hair] was going to be heaviest on his head and his ears. His tail has a big clump of hair on it as well. And then all over his body he’s got a little light tufting of hair everywhere. And it’s kind of scraggly and wiry. It’s kind of gross, but we feel like that just adds to his personality. He’s a street dog and it adds to him.” “He’s a street dog. He’s got a lot of bumps on his body. He’s got a lot of pigmentation splotches and scratches. All of this is the details that we’re going to have to pay attention to when our artist is in there painting his skin texture. We did simulate the little tiny bits of fur that he did have, [but we do] have other options to add some of that richness back in.”


“There are two different types of simulation that we can run on him: we can do a volume simulation [on] large jiggly chunks, and then we can also do a skin simulation that’s capturing the elasticity and stretch of skin. Dante did have both of them, but because he’s a street dog and he doesn’t have big muscles or fat deposits, he was mostly skin simulation.”

“Xolo dogs have large, bat-like ears, so we gave those to Dante as well. Because he’s a street dog and he’s had his fair share of tussles out there in the world, he also has a little tear in one of his ears, and his other ear is flopped over and broken. Another issue is that Xolo dogs, in fact most hairless breeds, have dental issues. What that means is they can easily lose their teeth.” “We had some Xolo dog owners bring some dogs so we could get up close and personal and play with them a little bit. One of the owners was saying if his dog happens to bite a bone the wrong way or bump his tooth off a rock, he might lose it. So what happens when you’ve got a dog who’s missing a bunch of teeth? You get this tongue sticking out all the time.”

“[‘Coco’ director Lee Unkrich] started talking about what he wanted this tongue to do, and animation started to think about tests they wanted to run, so we knew that this was going to be a challenge. This tongue was going to have to do a lot. Fortunately, we had a film not too long ago that had another character that had a lot of similar performance needs. That character was Hank from ‘Finding Dory.'” “A lot of the deformations that [Hank’s tentacles] had to do, we were going to do with this tongue as well. What we did was we took the rig that we developed there, dropped that into Dante’s tongue, and then we added some additional controls that were specific for his tongue, to add that richness.”