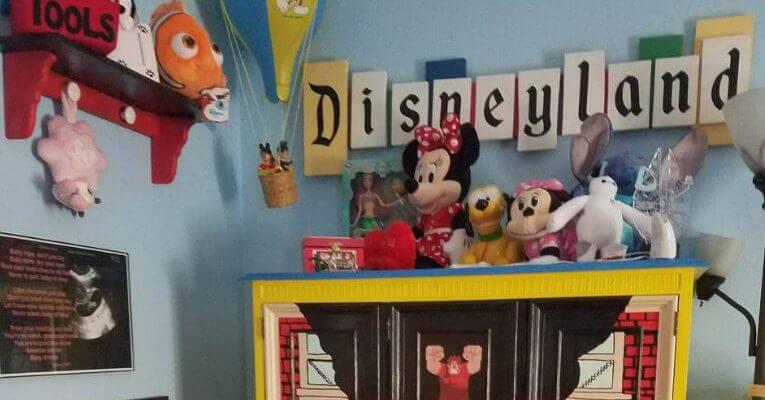 There was some uncertainty about doing the build.  But when Mindy found out, at 12 weeks into the pregnancy, that her child had Gastroschisis, her husband insisted on moving forward to make the best nursery they could build.

The couple set out to craft their own version of pixie dust in hopes of having a magical room ready when their daughter was born. To start off the project the couple built custom “vintage” Disneyland sign that was closer to what they wanted than what was offered at the parks.

Next came weeks of painting.  An armoire became a “Fix it Felix” game after several days work (and 18 hours of painting). Mindy sewed her heart out making all sorts of Disney themed items for the crib, car seat, curtains and even a diaper bag. Custom shelving and a handcrafted door knob lent itself to the magical nursery. Special stickers, wall décor and light switches were also created.  A specially made princess mobile was fashioned from a few purchased princess dolls. The weekends of wonderful work helped keep their hopes up as delivery date drew closer. “At night after the nursery was finished we would lay on the floor looking at projected stars hoping the room inspires our little one to be creative and have lots of imagination.” -Mindy The couple is also creating a colorful California Adventure inspired playroom, which is almost completed.   The room will have a light up Mickey’s fun wheel, several hand painted murals and feature a monorail that circles the room (we’re hoping that they’ll share pictures of their perfect playroom when it’s done).

On October 26, 2016 their daughter, Alexandra, was born.  Three weeks later, her medical needs tended to, their daughter was introduced to her Disney nursery. Thank you for sharing your home and story with us, Mindy.  We wish you and family many happy, magical memories with your wonderful Disney themed rooms. ITM is always interested to see what our creative readers have done to decorate their rooms, homes, cars and more.  We’d love to share your love for a favorite ride, park or similarly themed passion.  Please email Michael@insidethemagic.net for more information.

Source and images: the Espinoza family

Comments Off on At Home Imagineering: Custom-made Disneyland Nursery