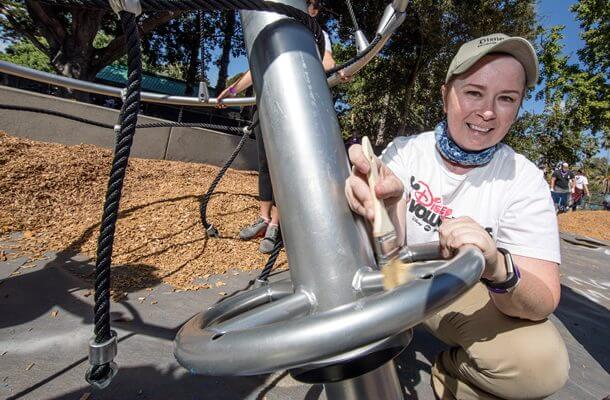 For over twenty years, the non-profit organization KaBOOM! has helped build new (and completely remodel old) playgrounds in underprivileged neighborhoods across the United States. And recently, the Walt Disney Company has joined KaBOOM! on their quest to improve the lives of children in Southern California.

This month Disneyland Resort VoluntEARS teamed up with community outreach program Hope Builders, the Anaheim Family YMCA, and KaBOOM! organizers to erect an all-new playground in Willow Park, Anaheim (just two short miles from Disneyland). This was the ninth playground that Disney has sponsored and participated in building for the area, and the best part is it was designed by kids, for kids!

Altogether it took 300 volunteers a total of only eight hours to complete the playground. Disney and KaBOOM! are already planning on future collaborations as well, with the next planned for nearby Pearson Park.

“Being able to give back means a lot. Growing up, my community helped me have a better upbringing, and I want that for the kids who use this playground. Then I hope that they’ll grow up and want to give back – to create a giving cycle,” said project team leader Art Montoya. For more information on KaBOOM!, be sure to visit the organization’s official website.