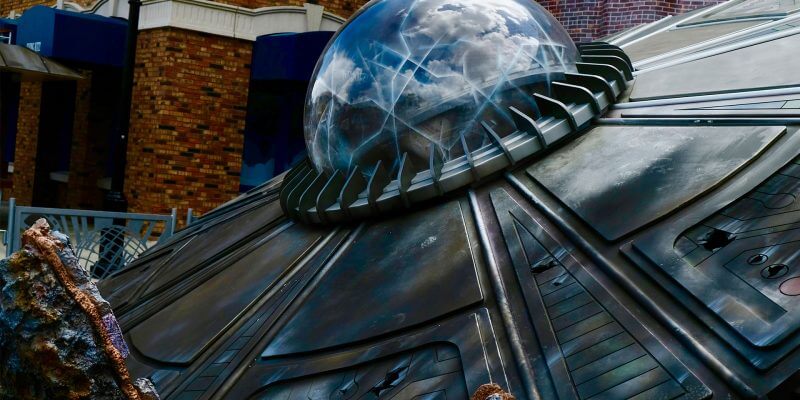 Halloween Horror Nights 2017 is only weeks away and Universal Studios Florida is already setting up scare zones around the park.

Recently, Universal had announced coming scare zones to this year’s event, which included Trick ‘r Treat, The Purge, INVASION! and Altars of Horror. Below, you can see video of some of the elements already in place for the Trick ‘r Treat and INVASION! scare zones.

The INVASION! scare zone is where guests will become the grotesque human experiments of fearless alien scientists who continue to plan the preeminent destruction of planet Earth. Currently, this scare zone contains what appears to be a massive flying saucer, sand bags and a military truck, all of which are in place for the coming event. The flying saucer was installed to appear as if it had crashed into the ground. Located around it is a group of crushed and rearranged bricks, which look as if they had been moved forcefully by the flying saucer’s impact. Multiple stacks of sandbags are placed near the crashed space ship. The Trick ‘r Treat scare zone is where guests will be thrust into the traditions of Halloween with an authentic showcase to celebrate the haunted holiday. Already set up in the scare zone are jack-o’-lanterns and door steps awaiting trick-or-treaters. This scare zone is said to have Sam lurking in the shadows to strictly enforce the rules of Halloween – and those who disobey will pay the price… Parked by the Starbucks and Ben & Jerry’s ice cream shop is an old Lincoln Town Car with half of a steel cage mounted on top of its roof. The cage appears as if it is meant to hold scare actors. The New York scare zone is The Purge and from this arrangement it looks terrifying. All of these items are wrapped in barbed wire.