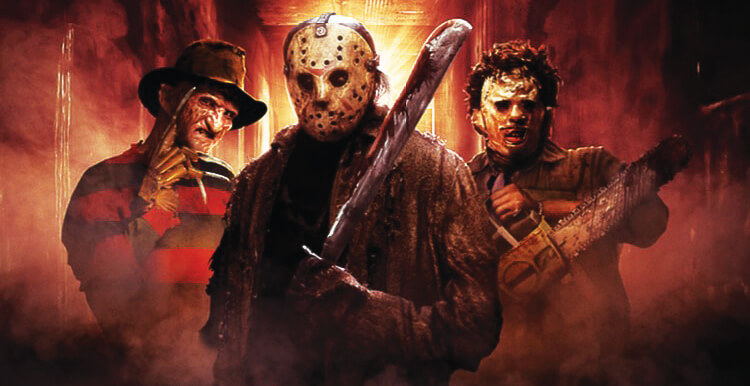 This weekend at ScareLA 2017 at the Los Angeles Convention Center, Halloween Horror Nights director of creative development John Murdy took to the stage for an hour-long presentation during which he enlightened the audience as to how he first broke into the haunt scene as a child, and why his passion for Halloween continues to this day. He also made a couple big announcements for this year’s events.

Coming to the 2017 iteration of Halloween Horror Nights at Universal Studios Hollywood is the Titans of Terror maze, featuring a team-up of three of the most well-known slasher characters in horror movie history: Freddy Krueger from the “A Nightmare on Elm Street” series, Jason Voorhees of “Friday the 13th” fame, and Leatherface from “The Texas Chainsaw Massacre.”

The maze will– for the first time at Horror Nights– take the form of a home haunt, wherein one horror fan attempts a marathon of his favorite slasher films. Naturally things go awry and that means deadly news for guests visiting the house on Halloween. After the presentation I had a moment to chat with Murdy about what inspired this jumping-off point for Titans of Terror.


Also announced at ScareLA was the Titans of Terror Tram, which partners all of the above movie maniacs with the psychotic serial killer doll Chucky from the “Child’s Play” franchise, who will host guests as they board the famous Universal Studios Hollywood backlot tram and venture through a nightmarish landscape populated once more by Freddy, Jason, and Leatherface.


The previous weekend’s Halloween Horror Nights panel at Midsummer Scream 2017 was just as exciting, with Murdy joining creative partner / art director Chris Williams to discuss the already-revealed new mazes for “The Shining” and “Ash vs. Evil Dead” coming to the event this year.


Halloween Horror Nights 2017 takes place on select dates between September 15th and November 4th at Universal Studios Hollywood. Be sure to visit the event’s official website for more information and advance ticketing resources.