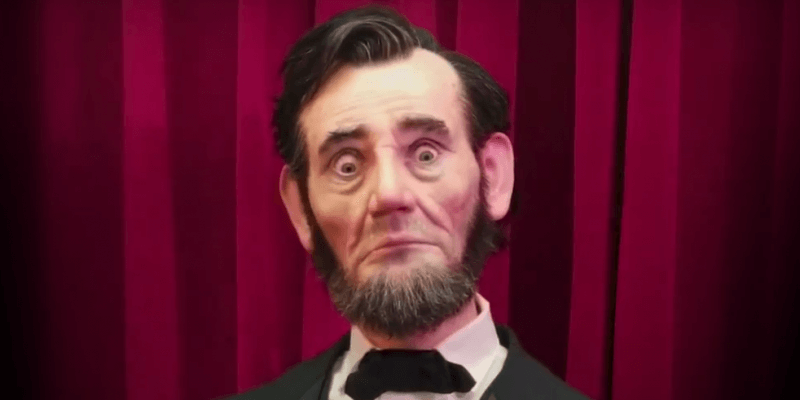 Garner Holt Productions, one of the leading designers and manufacturers of theme park animatronics, celebrated their 40th anniversary last month with an open house party showcasing some of their amazing work. Among the highlights was an incredibly lifelike animatronic bust of Abraham Lincoln.

The Lincoln bust is currently in phase II and it’s part of their Expressive Head Project, which aims to add realistic facial expressions to animatronics. The Lincoln figure is capable of more than 40 unique motions.

Take a look at the stunning animatronic in action, and listen to Lincoln speak at the end.

Garner Holt first did this sort of intricate facial work as part of a training project for the US Marines. Animatronic townspeople were created as part of an immersive training environment and facial expressions were used to help communicate the figure’s intentions, which had to be deciphered by soldiers.

The company has also been working on Project Yeti for a number of years, focusing on the creation of a seven-foot-tall yeti capable of over 120 motions. Garner Holt Productions created a visual/mechanical interface that allows the yeti to track people in the audience and lock onto faces.

Animatronic Lincoln showcases the current state-of-the-art possibilities and it’s the first in a new line of super-expressive figures called “The Living Faces of History.” The figures will be marketed to theme parks as well as museums and feature Mark Twain, Benjamin Franklin, Eleanor Roosevelt, Thomas Edison and more. The company can also digitally scan the faces of living people to create animatronics based on specific individuals, as they did with the Samuel Morrison figure for the African American Research Library and Cultural Center in Fort Lauderdale, Florida.

Advanced animatronics such as these from Garner Holt are taking theme park and museum experiences to the next level, bringing historical figures to life in an engaging and immersive way.

If you want a closer look at the Abraham Lincoln Expressive Head Project animatronic, it will be on display at the IAAPA Attractions Expo in Orlando in November.