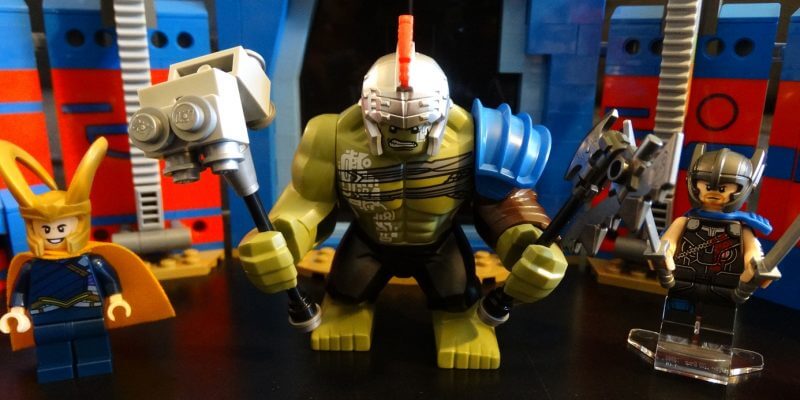 While “Star Wars” was the first big license LEGO acquired (and made excellent, exhaustive use of) in the late 1990s, the popular toy company’s relationship with the Marvel superhero universe has also been a thoroughly fruitful one. And that tradition carried over successfully into the Marvel Cinematic Universe, with dozens upon dozens of sets tying into the blockbuster movie series over the past decade.

Now Marvel Studios’ latest feature film offering “Thor: Rangnarok” is fast approaching, and LEGO has followed suit by releasing a number of new building sets featuring scenes and characters from the upcoming movie. I received a review copy of one of the larger items in this series, entitled “Thor vs. Hulk: Arena Clash,” and I spent an afternoon building and reviewing the set on video.


“Thor vs. Hulk: Arena Clash” is a nice-sized and impressively-constructed playset with a terrific array of LEGO minifigures (including Grandmaster, a Sakaarian Guard, Loki, Hulk, and Thor himself), some fun action elements, and outstanding playability for fans who want to recreate the already-famous gladiator battle scene featured in the “Thor: Ragnarok” trailer.