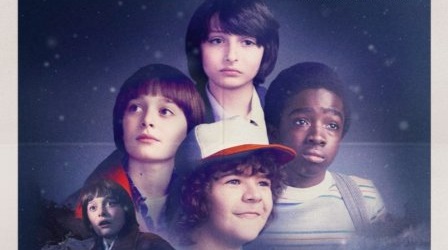 Ah, the 1980s… everyone’s favorite decade to look back on fondly, and to create cinematic homages to. For one of the best examples of this phenomenon, look no further than the popular Netflix series “Stranger Things,” which made its debut last summer and will return for a second season this fall.

For the past month the official “Stranger Things” Facebook account has been putting up new posters, once per week, each of which serves as a parody of a famous one-sheet image for a classic genre film from that era. So far the tributes are fairly accurate to their source material, and effectively evocative of the tone of the show. Check out the four existing posters below: At the very least it’s nice to see that “Stranger Things” is not shy about acknowledging its influences. What other examples of 80s popular culture will shape the series as it continues to move forward? We’ll have to tune in two months from now in order to find out. And presumably we can check back each week to the “Stranger Things” Facebook page for a new poster until then.

“Stranger Things” season two will be released to the Netflix streaming service in its entirety on Friday, October 27th.