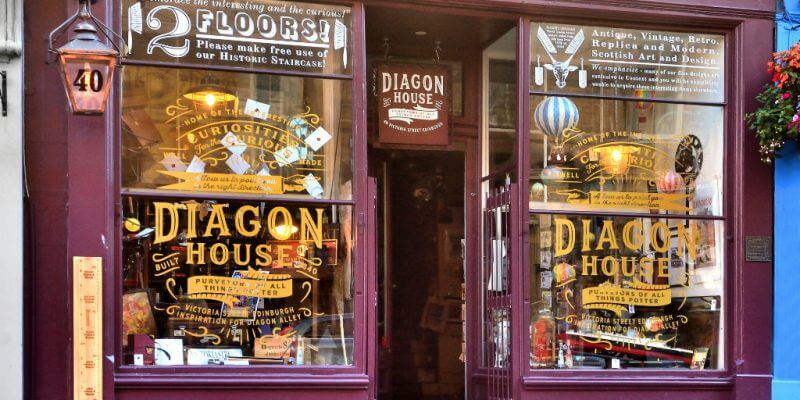 “Harry Potter” fans, there’s a magical new store in Edinburgh made just for you.

Diagon House, located at 40 Victoria Street, is filled with “Harry Potter” items, including stuffed Hedwig toys, chocolate frogs, tote bags, books and more. The store also sells wool scarves adorned with the house colors of Gryffindor, Hufflepuff, Ravenclaw and Slytherin, which are the only officially licensed Harry Potter merchandise made in Scotland. Diagon House sits among the colorful and quaint shops on Victoria Street, which was built between 1829 and 1834. The area reportedly inspired J.K. Rowling to create Diagon Alley, the shopping district for witches and wizards in the “Harry Potter” book series. Lines for Diagon House wind all the way down Victoria Street before the shop opens, leading owner Andrew McRae to extend store hours. McRae selects the eclectic collection of Harry Potter items for the shop. “Official Harry Potter merchandise can be found amongst work by local artists and a whole range of weird and wonderful curiosities to suit all pockets. It’s definitely the immersive experience that people are queuing up for,” he said. If you can’t make it to Edinburgh, Universal Orlando also has its own Diagon Alley in the Wizarding World of Harry Potter. The enchanting area is hidden behind a London street, and you can take a walkthrough tour in our video below.