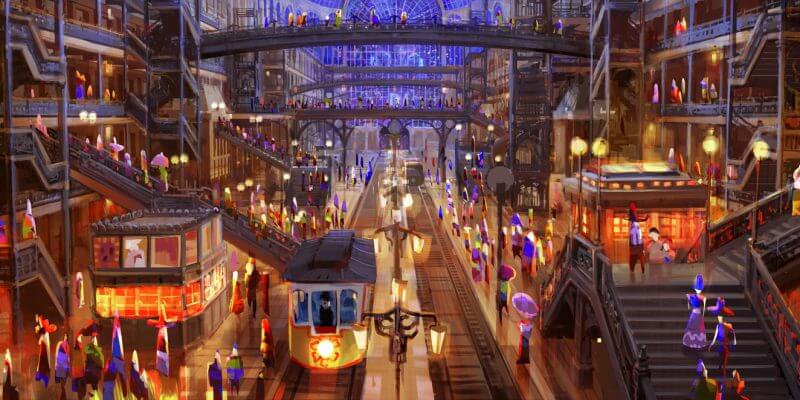 As you can probably imagine, the process of creating a feature-length animated movie is very different from how a production crew approaches shooting a live-action film. For one major example, instead of scouting and choosing locations, in animation the movie’s design team must invent and construct the varied locations in which the story takes place, often entirely from the ground up.

In the case of “Coco,” the highly-anticipated upcoming feature from the Disney-owned Pixar Animation Studios, that challenge was doubled. Not only did the team create the grounded, true-to-life Mexican village of Santa Cecilia, but they were also tasked with envisioning and erecting the vertically-sprawling, labyrinthine city in the Land of the Dead.

During my visit to Pixar’s headquarters in Emeryville, California several weeks ago, I sat down with “Coco” production designer Harley Jessup, director of photography Danielle Feinberg, and set supervisor Chris Bernardi to find out what went into the conception of the movie’s two vastly different worlds.

“Multiple research trips to Mexico were inspiring. We felt an enormous responsibility to be as authentic as possible while joyfully celebrating the culture of Mexico and the importance of family. Mexico is a designer’s dream and I knew we would feature the rich textures and colors we saw everywhere.”

“In 2011, I wasn’t even on the film yet. I’d been helping do development work for [“Coco” director Lee Unkrich] and they got the go-ahead on this concept. It was early October, and [we] realized ‘Dia de Muertos is coming right up. It’s not going to come around again for another year.’ We needed to go. So a small group of us went and everybody was coming from [a less-than-knowledgeable] place about Mexico. We all had our preconceptions, and that first trip really busted things wide open as far as so many of the U.S. stereotypes. [They] were clearly not true.”

“We visited with a few families on that first trip, and then the second trip was almost all families. Each group of us would go off with a family for the day, and that– not just for the movie, but as a life experience– was really profound for me, and I think for a lot of the crew people.”

“This is also the first time that I’ve gone on a research trip for a show that I’ve lit. [For] ‘Brave,’ ancient Scotland was out of reach. On ‘Wall-E’ they offered to take me to a garbage dump, but I thought maybe I could light it without going.”

“The value that came back from [the research trips] was incredible. The excitement for us, from a shading and modeling standpoint, [was] the deeply, richly textured world with all of this beautiful stuff to make. It’s all really exciting stuff to work on.”

“Early on Danielle, Lee, and I worked together to roughly define the visual structure of the film, to outline the differences between the land of the living and the Land of the Dead. For the design, Santa Cecilia [in the land of the living] was more straightforward. We needed it to be very appealing. The reference probably helped us the most there.”

“We [wanted it] to feel like a very vibrant town in Mexico. It’s not some dreary place, but we get to use all the aging that Chris puts into his sets. It’s a vibrant world but it doesn’t go as colorful as the land of the dead, so we have this wonderful paint that then has been bleached by the sun and it should feel like this warm, dusty, sun-drenched town.”

“Some parts were similar [between making ‘Coco’ and previous films] but I was living and breathing this in a very different way than I had on the two previous films I directed the lighting for. On this movie, I was much more involved in the color script than I had been on previous movies– in the beginning planning out the lighting with Harley, and getting to work the worlds and the lighting together in a way that I hadn’t been able to do before, so that was really interesting.” “So [the research trips] had a huge impact on my experience with the film and wanting to be able to bring some of that stuff in, because I had really experienced it in this very concrete way. Otherwise some of the principles are the same– ‘Okay, we have a couple worlds. How are we going to have them separate?’ The color part of it was obviously a huge, exciting thing to do. There was a giant challenge in the Land of the Dead, which can’t be overstated enough, how big of a challenge that was. It took half our brains all the time worrying about that and working on it.”

“We have to design and build everything that you see on the screen, [but we also] make use of the Pixar backlot. I fought for this. I don’t want to design another pencil cup, stuff like that. We have a collection of cameras, we have vehicles of all kinds. We always need to create more custom ones, but it really helps get a layered feeling in the sets without killing everybody.”

“It lets us spend our time on the stuff that’s really unique to the film, but texturally for us on this show it was a little more difficult, because a lot of the things in here were particularly unique, in terms of the amount of age and history. The sort of cobblestones we were making required us to look at things in a new way to really capture it.”

“We’re sort of the carpenters and masons of Pixar. It’s my job to take the vision for the world that Harley and Lee have come up with and turn it into something that will show up in the film. We build them in the computer, in three dimensions, to give our characters a world to inhabit.”

“We really struggled in getting a concept going for the Land of the Dead initially that was spectacular and inventive enough for what Lee Unkrich had in his mind. That was probably the main difference.”

“Two-thirds of the film is set at night, and that was a major consideration. In the land of the living we were looking at keeping the wonderful color that we were seeing on our field trips but treating it in a different way than the color in the Land of the Dead. The marigold bridge literally connects those two worlds, and that’s building on the mythology of marigold petals representing the path to family.”

“The land of the living is whitewashed walls with accents of brilliant color and dusty streets. The Land of the Dead is nighttime, artificial light, theatrical light and wet streets. So we were able to really make use of those contrasts that are dictated by the story. That’s where we’re starting in every case, is trying to support the story that Lee wants to tell.”

“In its own way, we tried to give the Land of the Dead enough conceptual structure so that we knew what we were doing. It wasn’t [like a] Dr. Seuss world. We knew it had to have its own believability and system to it, that the audience would at least sense that it wasn’t just random. Many of the [details] are never specifically alluded to in the film, but we’re hoping the audience will be able to see the layers of history, the inner connectivity, and the beaurocracy. We’ve tried to show that this place actually is a working system.”

“While it’s the Land of the Dead, these people came from Mexico, so it’s really more about showing the history of Mexico with just a little twist built on top, which is where you get that strange verticality to it. [The city goes] through a Victorian era to a more modern era, people are rebuilding their home that they grew up with in this new world.”

“We studied the history of Mexico to try to fold that into the logic of the Land of the Dead. We really started to get into the layers of history– where the first residents of the World of the Dead were building pyramids, then the colonial era, the Mexican Revolution era, and then finally into mid-twentieth century all the way up to the cranes building houses full of people yet to come.”

“Lee wanted what he called a ‘fantastic verticality’ in the Land of the Dead, to contrast with the flatness of Santa Cecilia. We have skull motifs and skeleton motifs worked into the architecture in a way that is subtler than what we might do on a ‘Cars’ movie or ‘Monsters Inc.’ where it is more gag-oriented. This was a quieter take on all that.”

“The city of Guadalajara has been a huge inspiration for the Land of the Dead. When we arrived there on our second field trip to Mexico we said, ‘Okay, this is what we want to be looking at.’ It’s a multi-layered city, and brightly colored. The stairways and bridges and buildings are arranged vertically up steep hillsides. It’s a very photogenic city, which makes a very rich experience as far as laying out the camera angles. Underneath it all runs a network of tunnels. We started working with the idea of the layers of history being expressed in the World of the Dead because Guadalajara is so richly layered.”

“In the Land of the Dead, [there are shots] that have seven million lights. We’ve never done a shot with seven million lights [before], so it’s definitely a challenge for us. The way to get that into the film was to continue to develop a little bit of code we came up with on ‘The Good Dinosaur’ for the fireflies, and what this is doing essentially is it finds all the streetlights and puts a light there. The computer then considers [all the lights as] one light, so I can turn on all the streetlights in the scene very cheaply. That’s how we could actually build up something this complex and be able to get this vibrancy in this world.”

“Danielle, Chris, and I have worked on this show for about five years now. I’m sad to see it ending. It’s been such a rich and meaningful project.”