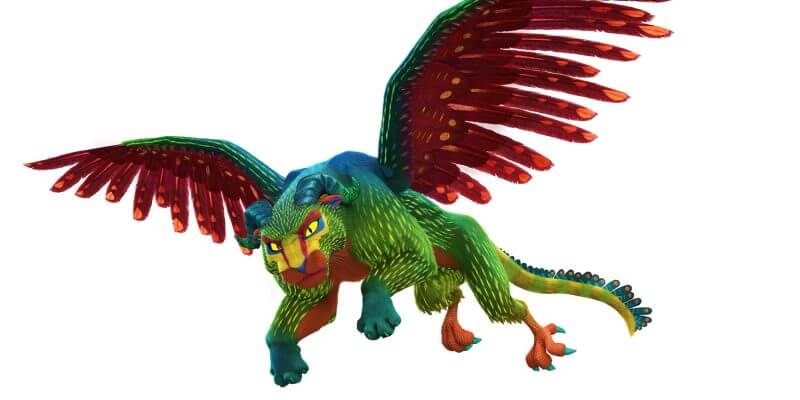 Character modeler Alonso Martinez has been working for Pixar for over a decade, accumulating animation and visual effects credits on everything from “Up” to “Cars 2” to “Inside Out.” But his latest (and likely greatest) assignment was helping to create the new character of Pepita for Disney-Pixar’s “Coco”— the company’s upcoming feature inspired by the Mexican holiday Dia de los Muertos.

Several weeks ago I had the opportunity to visit Pixar Animation Studios in Emeryville, California, and I learned from Martinez about Pepita’s Mexican folk-art influences, the development of the character’s look, and her role in the highly-anticipated “Coco.”

“Pepita was inspired by a traditional kind of folk art in Mexico called Alebrije,” began Martinez. “Since I was a kid, I’ve actually [had] a collection of them, and every time I went down to Mexico to visit my family I would always sneak out and try to find the most beautiful one. To me it was kind of like ‘Pokémon’-hunting.”

“The thing that became really apparent to me, going to all these different cities in Mexico, is that you actually have different families that make Alebrijes, and they each have their own flavor to them. Some make more insect[-like] ones and others make [chimaera-type] ones like the tiger/lion/baboon thing [in the image below]. That is so cool.”

“When we think of traditions and folk art, we’re used to thinking about things that are very very old, but proportionally [Mexican artist Pedro Linares] came up with this idea in 1936, which is not that long ago.”

“He was a piñata maker, and he fell sick. He had an illness that led to a fever dream, and in his dream he was in the forest, where all of a sudden he started seeing these chimaera animals that had started appearing. They were super colorful– they were [for example] donkeys with wings, and snakes with chicken feet. And like any artist, when he woke up he wanted to capture the essence of the thing that he saw.”

“He originally made them out of papier-mâché, which was his craft. Later they were reinterpreted as being wood carvings [made out of] a special type of wood found in Oaxaca that is called Copal wood, that is a very soft, easily carvable piece of wood. There’s a lot of beautiful intricacy and detail that goes into it. Each family [adds artistic] interpretation and different designs to [the form].”

“And in the same way that some of these artists are taking artistic liberties [to Alebrije] to make it their own, there’s no specific mythology or religious background that this [style of art] comes form. So each person can bring their own meaning and symbology to it.”

“This art form has made such a big impact into Mexican culture that it has taken on new forms. Like a lot of things in Mexico, [Alebrije are] very bright and colorful. And now there are giant floats in parades, where they make really big versions of them. We took all of that and tried to incorporate it into our film through the character of Pepita– the most respected and fearsome character in our movie.”

“When [“Coco” director Lee Unkrich] and the rest of the team went down into Mexico and saw [Alebrije], they wanted to shine a spotlight [onto] this beautiful art form that is really unique to Mexico. We wanted to find a way to interweave it into the story, and we ended up making them spiritual guides to the characters, that would guide them from one part of the story to another.”

“We did a deep dive into the reference [material to] find out the real anatomy of things. Every Alebrije, just to be specific, is a chimaera animal. There’s actually this type of wooden Mexican folk art that people mistake for Alebrije, [but] it’s actually nagual. Nagual [is] the belief that every person has an animal form of themselves, like I might be a coyote or something else. Those are non-chimaera animals.” “Our chimaera has a combination of [more than one animal]: a lizard tail, eagle feet and wings, the front arms and head of a tiger or jaguar, [and] ram horns.”

“One of the really interesting challenges that she posed, the reason why [Pepita] was so difficult to make is, quadrapeds are generally difficult. Like Dante [the dog in “Coco”] is very difficult to make. But then you have this chimaera animals, that coming out of her arms are other arms with wings and feathers on them. So it was very tricky to make [her].”

“We wanted to pay homage to the wood carvings, so we wanted there to be a graphical nature [to our Alebrije], but we [also] wanted it to feel like it was a believable character in this world.”

“And so we were thinking about Pedro– the vision that he might have had was more likely that they were realistic animals, and later they became interpreted through wood carvings. Pepita is somewhere in the middle. So she has some flavors of the wood carvings, but [also] some organic, fleshy nature to her.”

“As part of enriching [Pepita], every step of the way we’re trying to make her cooler and cooler. We knew that her personality was that she’s going to need to come into the room and demand a lot of respect and be a fearsome character. And so we knew that [there would be] a pose that was going to be very important to her, and that we needed to get right.

“[We looked at a lot of] really angry-looking tigers. So you’re immersing yourself into these reference images, these demonic, angry cats. One night after work I was going to sleep and I closed my eyes, and all I could see was angry cats.”

“We were exploring, ‘do we do the thing we were actually seeing on the photographs, or do we simplifiy and make it look more like the Alebrije?’ We were doing really really early prototypes to see, ‘will this look good?’ We [made] some artistic decisions that they’re graphic, they’re angular, [there are] wrinkles that are formed.”

“We were looking at all the different cat claws and the different shapes that they have. One way in which human anatomy is very different than cat anatomy is that their fingernails or claws are actually kind of switchblades, they’re retractable. They rotate out. It’s a very unusual thing for mammals.”

“Usually when we have a limb that goes from one bone into two bones, it’s symmetrical along the axis. But here they’re very asymmetrical, which is really unusual. They do this so that they can hide their claws inside of the meat of the fingers, so that they keep their claws super sharp. And when they bite into prey, it makes a ninety-degree turn and really sinks into them.”

“Another cool aspect [of Pepita are] the wings. Unlike our other movies, for example “Piper,” where our birds are usually the same color, here we [wanted] to have really bold, bright colors, like magentas next to deep purples. [But during our tests], if there [were] any interections, you would see [them], really far away. We [had to come] up with techonologies to prevent that from happening, paying a lot of attention to the shapes of the feathers.”

“In the final sculptural format of how she ended up looking digitally, the forearms have a lot of definition in the musculature and really complicated shoulder bones. [We put a lot of] love and detail into the claws and the snarls and the teeth.”

“Because we’re not filming a real animal that exists, we have to think about ‘okay, we’re going to have to design a fingernail? Is there any way that we can design the fingernail to support the personality of the character?’ The tooth, the snarl, you’re using [everything] to communicate the same thing. It becomes a really memorable character that says something.”

Comments Off on INSIDE LOOK – Meet Pepita, the sure-to-be-breakout supporting star of Disney-Pixar’s “Coco”