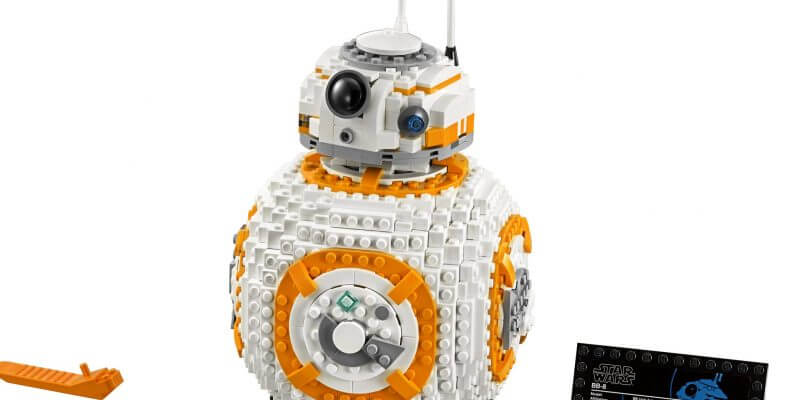 “Stars Wars: The Last Jedi” is now right around the corner, and one of the last big milestones before the movie’s actual release is tonight’s exciting Force Friday event– wherein most of the highly sought-after merchandise from this winter’s biggest movie becomes available at at both brick-and-mortar and online retailers.

Ahead of the fan-frenzy midnight release, LEGO has announced more tie-in products and sets featuring characters and ships from “Star Wars: The Last Jedi.” First up is the Resistance Transport Pod (set #75176) with Rose, Finn, and BB-8 minifigures. In the buildable characters series, LEGO has unveiled this great-looking brick-built BB-8 (set #75187), which also includes a tiny minifigure version of BB-8 as well. The Elite TIE Fighter Pilot (set #75526) will prove a formidable addition to your First Order navy. Rey (set #75528) comes dressed in her “The Last Jedi” training outfit, with a blaster and Anakin Skywalker’s lightsaber. The Elite Praetorian Guard (set #75529) is reminiscent of the Imperial Royal Guards as seen in “Return of the Jedi,” with updated armor to suit the First Order and watch over Supreme Leader Snoke. Finally, Chewbacca (set #75530) seems a little too happy, considering his best friend in the universe just got murdered, but it’s still a cool buildable character set that includes Chewie’s bowcaster. All of the above products technically become available tomorrow, September 1st, but Force Friday takes place tonight at midnight all across the country for those who want to be among the first to own them. Be sure to visit the official StarWars.com guide to Force Friday retailers to find a participating store near you! “Star Wars: The Last Jedi” will be released into theaters nationwide on Friday, December 15th.