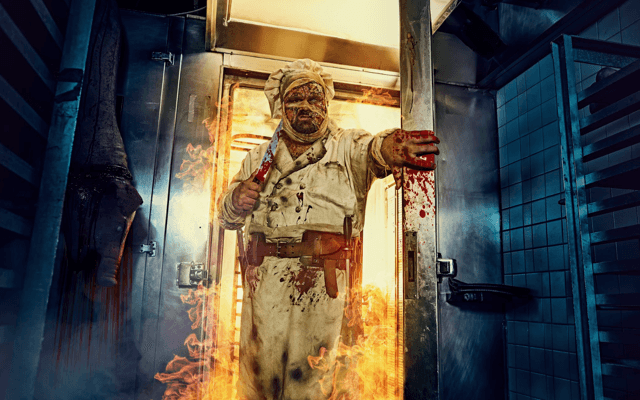 A new spirit has risen on The Queen Mary and guests of Dark Harbor will feel his presence in FEAST, a new maze for the annual Halloween event in Long Beach, California.

As the tale goes, during WWII, an enlisted military man serving in the ship’s kitchen quickly moved up the ranks to become a highly-decorated Chef. Unbeknownst to the soldiers traveling aboard, Chef had a dark side.  Quietly he would sedate soldiers in the middle of the night to prepare them as ingredients for his latest dishes.

When he was caught, the Chef was thrown into one of his own ovens and cooked alive. Loyal to their leader Chef’s dutiful kitchen staff sacrificed their lives to become his evil henchmen, burning themselves in the same oven. The spirits of Chef and his evil crew went into hiding aboard the ship for many years. Now, these long-time stowaways have resurfaced to resume their deadly duties of collecting and preparing victims for Chef’s latest concoctions.

FEAST will be just one of seven mazes aboard The Queen Mary this year as Dark Harbor will offer more monsters and more mazes, and will be open for more nights than ever before. Bars, fire shows, aerialists, DJs and much more will make this one of the most frightfully fun events of the season.

During the recent Midsummer Scream convention, a special “Sinister Circus” evening party was held on the top deck of the Queen Mary, with all the Dark Harbor iconic characters ready to party while the event showed off some of its upcoming highlight entertainment. The annual haunt will open its gates on September 28 and will continue on select nights through November 1. For tickets and more information on the event be sure to visit the official website!