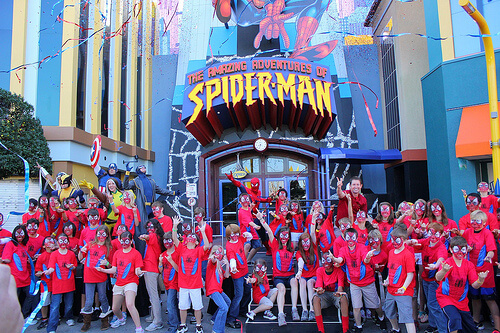 Marvel super heroes have been around for over fifty years.  These enigmatic, colorful, comic book creations have been entertaining fans with dozens of inter-connected stories and adventures. Marvel studios, now owned by the Walt Disney Company, continues this super successful sensation with host of hot properties in the movie theaters.

Before Disney acquired Marvel, Universal scored a superhero scoop with their licensing of several Marvel mainstays for their Marvel Superhero Island at Islands of Adventure in Orlando, FL.  That arrangement has limited Disney’s Marvel-ous presence on the East coast, but the Mouse has recently started to install is popular franchise in other theme parks around the world. The winners of this powerful proliferation of super action are the fans.

While more Marvel experiences will emerge in the future, here are five ferociously fun finds for a super adventure. 1. The Amazing Adventures of Spider-Man – Universal Orlando, Islands of Adventure

Already one of the most inventive and immersive marriage of motion and film action, the Amazing Adventures of Spider-man received an HD upgrade five years ago.  Smoother and hyper-realistic renderings of the rides adventure, the enhancement also gave new looks to familiar villains like Green Goblin.  This seamless stitching together of ride and graphics is a must-not-miss when visiting Universal Orlando Resort’s Islands of Adventure.  NOTE: a similar (ride vehicle and computer generated graphics blend), Transformers the Ride 3D, exists at Universal Orlando.

Scheming to capitalize on the power of fear, Doctor Doom has devised a devious drop dependent delivery device to power is evil empire.  Strapped into seats on of the twin towers of the terror “trap,” guests are rocketed skyward only to plummet several times in a fear inducing free fall.

The most recent marvel from Disney, this refit of Disney California Adventure’s Tower of Terror features state of the art animatronic and digital adventure as guests become part of the action in an effort to free the Guardians of the Galaxy from clutches of the collector. Guardians of the Galaxy – Mission: BREAKOUT! delivers fly-out-of-your-seat sensation and super, heroic action.

Disney’s newest theme park has also included a Marvel superhero experience.  This multi-faceted marvel of Marvel’s greatest is located in the Gardens of Imagination.  There guests can meet Spiderman on a New York City rooftop; virtually try on Iron Man’s various armor; meet Captain America, learn how to draw various Marvel superheroes in the Marvel Comic Academy; and experience a multi-media overview of the Marvel universe. Additional Marvel experiences like Storm Force accelerator and the rest of Marvel Superhero Island, at Islands of Adventure, are also ready to entertain fans of these super powered heroes.

What Marvel hero/attraction would you like to see come to life?  Please share your thoughts in the comments below.