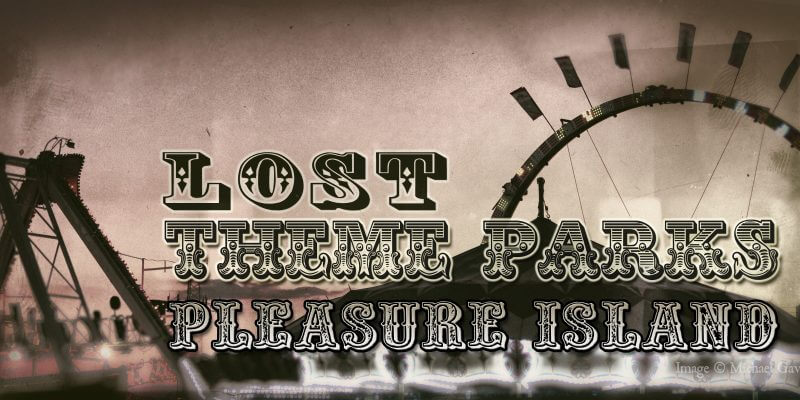 Ironically billed as the Disneyland of the Northeast as Disney had its own version of Pleasure Island from 1989-2008, this Massachusetts amusement park (1959-1969) featured 48 rides before it closed.

The popular New England park has several similarities to Disneyland, California, in that it was designed by the same man who helped design Walt’s California park, Cornelius Vanderbilt Wood.  Pleasure Island also enjoyed numerous ride sponsorships in the same manner as Disneyland.

The Massachusetts amusement park was started by “Child Life” magazine publisher William Hawkes in 1959 only a few years after Disneyland opened.  Pleasure Island spanned 80 acres. Attractions at the park included a small scale railroad, petting zoo, miniature golf, and Monkey Island, which showcased the antics of the small primates. Listed below are a few of the more popular rides.

Adventurers would board a guided boat (guided by a driver – no tracks on this ride) and encounter sharks, a charging rhino and cannibals.  The highlight was an encounter with a  giant white whale surfacing near the boat. After boarding a carriage, travelers were taken back in time to the old west.  Along the way they would encounter angry cattle; a hanging at the town jail, and a final run in with a gunslinger inside the piano bar. Pirates were the theme of the free floating boat ferrying passengers to Captain Kidd’s Treasure Island.  Along the journey the boat’s skipper spieled with bad puns and jokes until reaching the destination.  Cannon fire greeted the party as they approached the landing. The centerpiece of this attraction was an Atlas Mercury rocket. The Mercury program was the forerunner to the Apollo moon landing program. Riders were strapped into position and then experienced the sensation of lift off, via centrifugal force, while viewing images from “space” seen at the top of the capsule.

Wreck of the Hesperus

Based on the poem by Henry Wadsworth Longfellow, this dark ride took guests aboard a small sailing ship shaped ride vehicle for a maritime adventure that culminated in an encounter with King Neptune.  After “sinking” as the result of a terrible storm, riders enjoyed an “underwater” view of the ocean complete with giant animated sea turtle and circling shark.  Neptune chided, “Beware ye who have desecrated my kingdom!” as the boat made its exit.

Pleasure Island also featured headline entertainment from stars like Cesar Romero, the Three Stooges, Michael Landon, Jerry Mathers (the Beaver) and Clayton Moore (the Long Ranger).  Gunfights would break out regularly in the Western area of the park.

The most popular entertainment venue in the park was the Diamond Lil Saloon which featured performances by Diamond Lil (based on the Mae West character, not the Marvel comic).  Sponsored by Pepsi, this late 1800’s saloon offered four shows daily, with an additional show each day on the weekend.  The show was produced by former Disneyland public relations and show promotion executive Lloyd Settle. Due to the short summer seasons of New England the amusement park only operated for ten years, closing in 1969.  Edgewater Office park now occupies the area which once called this historic park home.