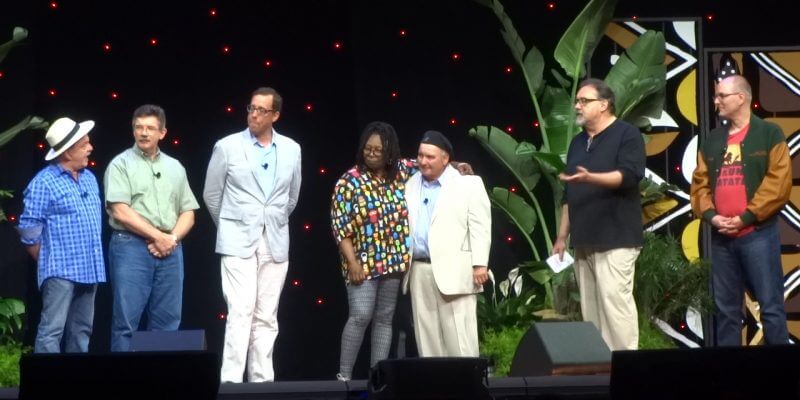 Hakuna Matata! “The Lion King” is one of Disney’s most beloved animated features of the past twenty-five years. It’s also the highest-grossing hand-drawn animated film ever and once ranked as second highest-grossing film of all time. Fans continue to quote, sing along, and fondly remember the movie more than two decades after its release.

That’s why during the final day of Disney’s official fan convention D23 Expo 2017, the producer, director, animators, and voice cast of “The Lion King” came together to talk about what it was like to work on the film, and discuss the ongoing legacy of one of the world’s most famous and cherished motion pictures.


Producer Don Hahn, director Rob Minkoff, and animators Mark Henn and Tony Bancroft were joined on stage by “The Lion King” voice actors Ernie Sabella (Pumbaa), Jim Cummings (Ed), and even newly-honored Disney Legend Whoopi Goldberg for the presentation. Then at the end of the show, the audience was treated to a live performance of Elton John and Tim Rice’s famous song “The Circle of Life,” performed by Carmen Twillie, who sang the song in the movie.

WATCH – “THE CIRCLE OF LIFE” PERFORMANCE:


Don Hahn also made the surprise announcement that “The Lion King” will be returning to home video this August with a Disney Digital and Blu-Ray release. It will certainly be nice to have the fan-favorite film out of the Disney Vault once again. Comments Off on D23 EXPO 2017: “The Lion King” panel looks back at legacy of animated Disney classic with original voice stars