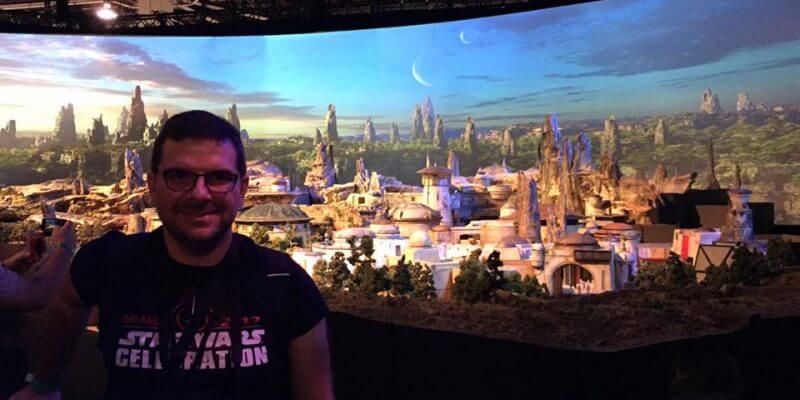 Two years ago, in the summer of 2015, I sat in “Hall D23” at D23 Expo during the Disney Studios live-action panel when CEO Bob Iger took the stage and made the surprise announcement that Disneyland and Walt Disney World would each be getting their own huge, immersive Star Wars areas. This past Thursday at D23 Expo 2017 I was standing front and center behind the black curtain that was then dropped to reveal the exhaustively-detailed model of the currently-under-construction Star Wars: Galaxy’s Edge, as we now know the name to be.

And two years from now, if all goes as planned and my health continues to hold up, my current theme-park-journalism career path continues unhindered, and the world doesn’t come to an end by then, I fully intend to be present for the grand opening of Galaxy’s Edge at the park itself. And while I’ve earned these privileges through the work I’ve done here at ITM and I am always attending these events in a professional capacity, I am invariably elated to be there for such pivotal moments in theme park history.


Of course, many of these moments are accessible to non-media as well. One “only” has to camp out overnight (or so I’m told) to get into Hall D23 for the Disney Parks presentation, so anyone who feels dedicated enough to try such a thing can have an experience similar to mine. Either way, it’s hard to deny that being present in that instant when big news breaks, especially big news that one cares about a whole lot, is an unforgettably pulse-quickening thrill.


That’s the appeal of being at something like D23 Expo: to be among the few thousand people to hear news like that first-hand and to witness the creative minds who crafted the stories and worlds behind that news talk about the revelations in person. This year at the Parks presentation there were more announcements than I could possibly list from memory, all released in a rapid-fire succession to the point where it would have been difficult to keep up even if you didn’t happen to be live-tweeting the event like I was.


Beyond the central presentations in Hall D23 and the somewhat smaller-in-scale (though equally appealing) panels on the other stages, the convention also offers a modest exhibit hall floor with displays like the Disney Archives exhibit and the previously-mentioned Star Wars model in the Parks Pavilion, but after a few hours wandering the hall it can be easy to run out of things to do. Unlike the annual pop-culture-fest San Diego Comic Con International (which begins today in Southern California), there aren’t a whole lot of offsite events or interactive displays– although it was admittedly a tremendous amount of fun when I finally got the chance to jump into Uncle Scrooge’s famed Money Bin.

No, the real attraction of attending D23 Expo isn’t meandering through exhibits or posing for photos with cosplayers or even spotting celebrities, although those are all part of the overall experience. The allure of D23 lies in its main events, and knowing what’s coming to Disney movies and theme parks mere seconds before the rest of the world does. In those moments, when the atmosphere is electric and the excitement is palpable, Disney fans are reminded why they wouldn’t want to be anywhere else.