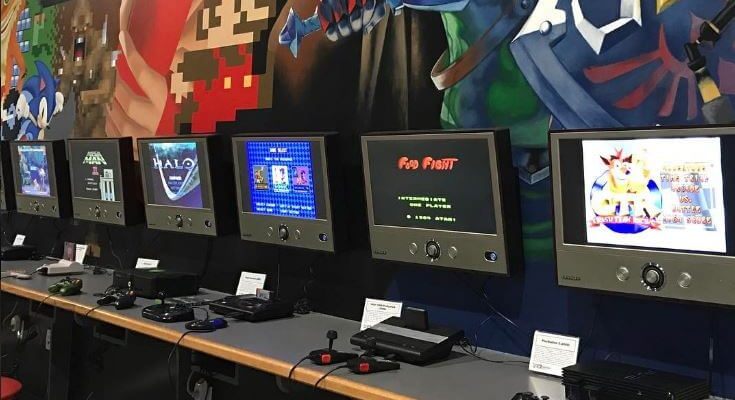 Video games have come a long way since the advent of pong in the 1970s.  With ever evolving graphics and complexity, the industry continues to grow.

More than just a destination for displays, the museum features interactive involvement with the oldest and newest of interactive electronic entertainment.  There are four fun gaming galleries to explore. In the Timeline of Consoles, the history and information on over 50 versions of consoles are collected.  From the original home video console system, the 1972 Magnavox Odyssy, to modern systems like Xbox One and Playstation4, all fifty video game variations are stored in the central database.  Accessing the database is done using an oversized game controller at one of several stations in the museum.  Information on top features, terrible features, popularity, and types of games for any given console are ready to discover. There’s no doubt that the video game arcades of the 1980s were the pinnacle of pixelated performances.  The ’80s Arcade in the museum, also known as Pixel Dreams, is home to several colorful cabinets of cool eighties video games.  Each visitor to NVM is given four tokens to start their climb to a high score and attempt to make it onto the museum’s leader board. In the Pre-Historic center, PONG dominates the scene.  Featuring an oversized representation of a 1970s television, games like PONG, Breakout and Night Driver can be played on a grand scale. Teaching STEM (science, technology, engineering and math) is the focus of the NVM classroom.  There, core skills can be learned in an entertaining and educational setting.  These educational programs are open to children and adults. The National Videogame Museum also hosts various events–usually with limited space which fills up fast.  Keep an eye on the NVM website for details.  Currently the museum, in conjunction with the Museum of the American Railroad, is offering a summer camp.  Camp Games & Trains runs from June 12 through August 21 on weekdays except the week of the Fourth of July holiday. The National Videogame Museum is located at 8004 North Dallas Parkway in Frisco, TX.  It is open Monday through Saturday from 10am to 5pm and Sunday from noon to 5pm.  Guided tours are offered at 1pm and 3pm, and the tour is included with price of admission.  General admission is only $12 for adults, $10 for children 10 and under, senior citizens, educators and active military (ID required).  Individual and Family memberships are also available, visit the NVM website for details Comments Off on Travel in Style: It’s Game On at the National Videogame Museum