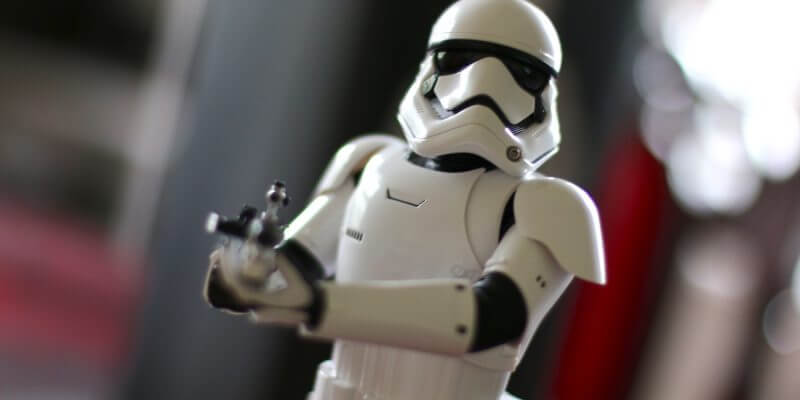 When “Star Wars: The Force Awakens” hit theaters in 2015, we caught a first look at just what the First Order was capable of. As we wonder where General Hux will lead them in “The Last Jedi” later this year, you can play Captain Phasma at home by commanding your own fleet of impressively detailed First Order Stormtrooper figures.

Hot Toys is known for its incredibly lifelike detail on its collectibles, capturing strikingly realistic facial expressions of famous Hollywood actors. But an equal attention to the finer points of a figure were given to their sixth scale First Order Stormtrooper, available now from Sideshow Collectibles ($204.99). The figure features the new Stormtrooper armor and helmet, a blaster rifle and pistol, and a hexagonal figure stand with the First Order’s emblem. Standing 11.81″ tall, it’s a good-sized addition to any “Star Wars” collection.

Unboxing the figure is an easy process, housed in a high-quality box with ample protective packaging. It comes with more interchangeable hands than I know what to do with: fits, relaxed palms, palms for holding weapons, and a “gesturing” left palm. From a distance, one might mistake this figure for just another Stormtrooper. But close inspection reveals the extra touches Hot Toys always includes in their figures. The individual pieces of armor seem like they could be removed one by one. Underneath lies a variety of textured garments, offering a realistic feel to this costume. The boots have different rubbery texture on their faces and soles, adding another layer of authenticity.