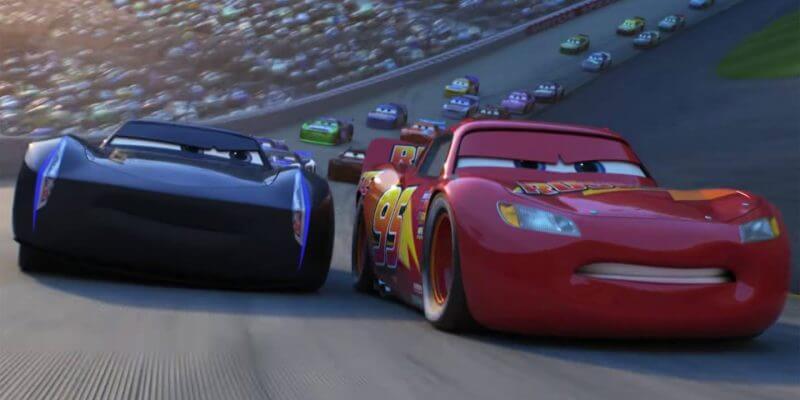 Unlike, say, “Toy Story” or “The Incredibles,” I don’t know too many adults who love “Cars.” It’s a weird barometer for measuring a family movie, I know, but ostensibly I believe that Pixar Animation Studios intends for their output to be palatable to all age groups. The “Cars” franchise, however, has been a sole outlier in that tradition, especially in the second film– which dispensed with the modest homespun charms of the original and dove headfirst into a bizarre globetrotting spy-movie parody.

That’s why I’m happy to report that “Cars 3” doesn’t just split the difference between the two previous entries in the series. It commits to change at top speed and throws “Cars” into full reverse, rocketing back past the lukewarm rustic roots of the first movie and arriving at something resembling a genuine, mature-minded drama with enough humor and adventure mixed in to ensure that both adults and children will find something to enjoy.

As the story opens, Lightning McQueen (voiced by Owen Wilson in his third lap around the “Cars” track) is riding high from a string of victories on the racing circuit when he’s suddenly overshadowed by newcomer Jackson Storm (Armie Hammer of Disney’s “The Lone Ranger”). Jackson is just one of a fresh breed of racecars known as “next-gens”– all souped up with aerodynamic power, but with little to spare as far as kindness or camaraderie goes.

After a devastating crash, McQueen retreats to his safe space at Radiator Springs for an extended convalescence, until his friends (the returning Larry the Cable Guy as Mater, Bonnie Hunt as Sally, and the rest) help him convince himself to get back in the racing game. From that point on it’s up to Lightning and his new trainer Cruz Ramirez (stand-up comedian Cristela Alonzo) to figure out how an aging sports star can reclaim his former glory without giving in to the crass commercialism proposed by his wealthy promoter, Sterling (Nathan Fillion).

But “Cars 3” is significantly more than just a comeback story. It’s an honest, grounded meditation on growing older, accepting one’s impermanence, and discovering what it means to be happy. For those reasons alone it’s a better, more thoughtful movie overall than either of the preceding chapters, but it also has just the right amount of playfulness and action to keep things moving and avoid descending into mawkishness.

There’s a lively extended setpiece near the middle of the movie involving a demolition derby that reinforces the “Cars” series’ need for speed. It also adds some much-needed chaos and introduces what’s sure to become another fan-favorite character– Miss Fritter, a clamorous school bus (played by Lea DeLaria of Netflix’s “Orange Is the New Black”). It’s inventive scenes like this that help “Cars 3” stop well short of feeling stale, and breathe new life into a slumping franchise– much like how its distraught protagonist seeks to get his six-cylinder groove back.

Obviously, I won’t spoil the resolution to Lightning McQueen’s quest, but I will say that the movie leans heavily into an additional theme of reexamining the past to better appreciate the present. It also further explores the girl-power movement established by recent “Star Wars,” “Ghostbusters,” and superhero movies. Thankfully, all of this fits seamlessly into the existing world of “Cars” and never feels forced or preachy.

While it’s unlikely that “Cars 3” will draw in a substantial new audience over the age of ten, adults who are dragged to see it by their kids (or even teenagers who– gasp– grew up on the first two) will be grateful to find that the movie has them in mind as well. It’s never boring, it’s got a good message, and it also manages to be pretty funny. None of that quite bumps it up into the top tier of Pixar features, but it does make it a bearable (and often actually entertaining) experience for those– like me– who wouldn’t necessarily otherwise associate themselves with the movie world of “Cars.”

Related: New animated Disney PhotoPass opportunity will let you pose with the stars of “Cars 3” at Walt Disney World and Disneyland Resort “Cars 3” will be released into theaters nationwide this Friday, June 16th.