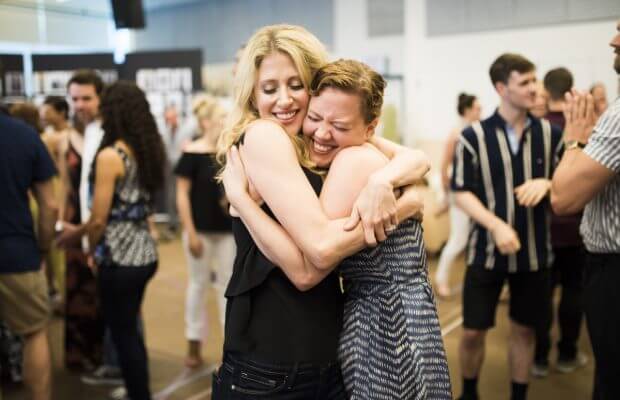 Rehearsals for Disney’s Broadway-bound production of “Frozen” began this week, and we’ve got a peek inside the rehearsal room as the cast gathered for their first day of work.

The show begins a pre-Broadway run at the Denver Center for the Performing Arts from August 17 – October 1 before heading to the St. James Theatre in New York next spring.

Scroll down for a look at the cast and crew as they prepare to enter the world of Arandelle.

Based on the 2013 animated film, the Broadway version of “Frozen” features music and lyrics from Kristen Anderson-Lopez and Robert Lopez, the creator’s of the film’s score. The book is by Jennifer Lee, the film’s screenwriter and co-director.

To purchase tickets for the Denver show, head over to the Denver Center for the Performing Arts website.

You can also see more photos from the rehearsal room at the TheaterMania website.

Comments Off on PHOTOS: Disney’s “Frozen” musical begins rehearsal for the Broadway-bound production