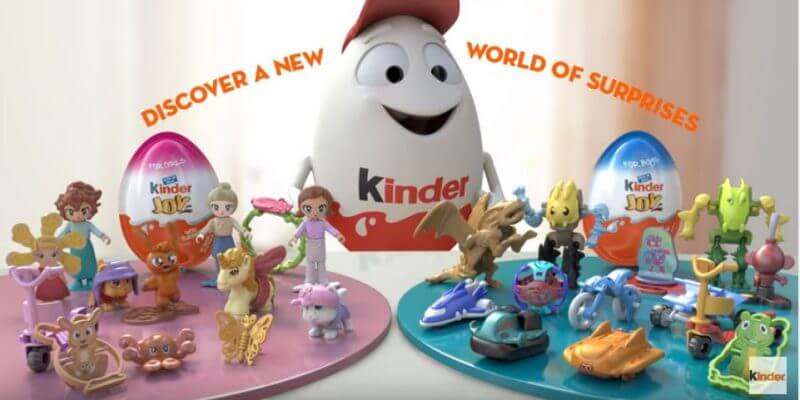 The wildly popular Kinder Surprise Egg has been delighting children young and old since it was first introduced in 1974.  The Italian confection consists of a hollow egg-shaped candy that has a milk chocolate outer shell and white chocolate inner layer.  Within this sweet surprise is a small toy, which is encased in a yellow, yolk-representing, plastic shell.  Two versions of the Kinder Surprise are available world-wide (except in the U.S.):  Pink eggs have toys for girls and the blue eggs contain boy’s toys.

While this toy-filled treat has been well received world-wide, it was doomed from its very introduction in the United States.  This is due the 1938 “Federal Food, Drug and Cosmetic Act.”  The archaic act prohibits any sweets which contain “non-nutritive objects” that have “no functional value” from being sold in the United States.  Despite warnings on the product, Kinder Eggs fell under that ban . . . until now.*

Italian confectioner Ferrero has found a rather simple solution that’s sure to egg-cite fans of the chocolate novelty.  Instead of placing the toy inside the candy shell, Ferrero has split the difference.  One half will contain the confection and the other will house the toy.  The new version will be called Kinder Joy.  The revised Kinder eggs will be available in the United States beginning January 2018. Expect a rigorous push to pander the sweets, as Ferrero, the 4th largest chocolatier in the world plans to increase its 2% share of the American market. *Purists preferring the original Surprise candy filled chocolate egg will still have to find their fix across the border.  Per that 1938 enactment, Kinder Surprise eggs are still illegal in the United States.  The Kinder Surprise eggs can be found in Mexico and Canada, but don’t try take them across the U.S. border. There are several sordid stories of hefty fines being levied on those who have attempted such sinister clandestine candy capers.