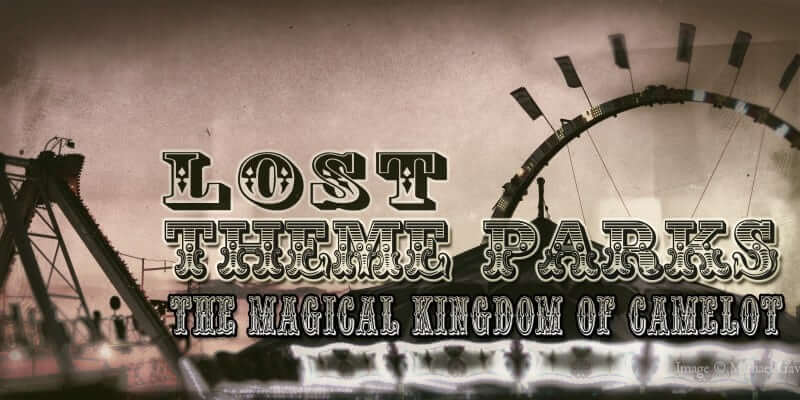 There was, perhaps, no better location for a theme park based on King Arthur legend than Lancashire, England.  It is there that England’s largest lake was located – the same lake “Lancelot of the Lake” is said to be from.

The lake was drained in 1692 and is exactly where “The Magical Kingdom of Camelot Theme Park” operated from 1983 until 2012.

“The land of great knights and amazing days” was designed to be a magical kingdom with medieval inspired décor and attractions.  Camelot welcomed visitors from May through September as a seasonal destination.  The amusement park maintained both family orientated attractions and thrill rides across their 140 acre site. Popular coasters included the Tower of Terror, a roller coaster which operated from 1989 to 2000.  The Beast was a dark roller coaster set inside a mountain, though it was first called Space Mountain due to its mountain theme.  Knightmare, a tall 5G coaster experience still remains on site today.

Camelot had a king’s ransom of dark rides too. Dungeons of Doom (which opened in 1994) was a ghost train experience, and Mad Monastery visitors navigated their way through a dark funhouse.

Entertainment included Cats of the Roundtable, Sooty and the Dragon puppet show, Merlin’s Magic show, Merlin’s School of Wizardry, Birds of Prey and a Jousting tournament.

Camelot Theme park changed several times during its 19 year run.  Declining attendance (allegedly, in part due to the draw of the Queen’s Jubilee in London) brought about the park’s closure in 2012.  Several of the coasters and attractions were sold to other theme parks.  An initial attempt at building homes on the site was declined in 2014 and another request for the same purpose was proposed in 2016.