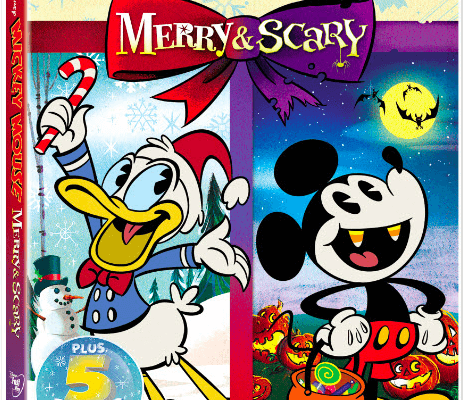 Invite Mickey and Donald into your home as they bring laughs and merriment to not one, but two holiday seasons!

The Scariest Story Ever: A Mickey Mouse Halloween Spooktacular!

For Halloween, Mickey has tricked out his house like a “tomb, sweet, tomb” and along with his pals, Donald and Goofy, plans to tell hair-raising Halloween stories! However, his attempt at being scary falls flatter than a pancake. Can Mickey conjure up a truly terrifying tale before the stroke of midnight?

It’s the most wonderful time of the year…to migrate south for the winter! But Donald wants to stay put and celebrate his first Christmas with his friends. Mickey creates the ultimate list of everything to make Donald’s first Christmas great, but before you can catch a snowflake on your tongue, Donald has turned into a shivering, sneezing duck-cicle! The DVD will also include five 3-minute shorts:

“Mickey Mouse: Merry & Scary” will be available August 29 wherever Disney DVDs are sold.

Comments Off on Laugh your way to the holidays with Disney’s new “Mickey Mouse: Merry & Scary” on DVD