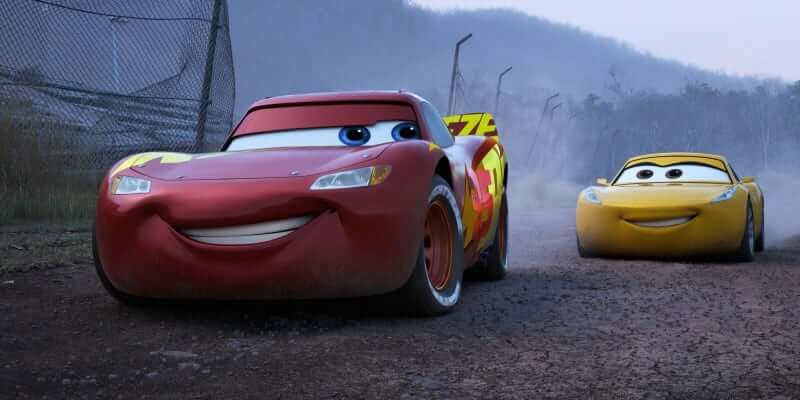 Over its thirty-year history, the acclaimed animation studio Pixar has established a nearly-impeccable track record of quality output.

From early shorts to “Toy Story” to “Up” and beyond, Pixar (in cooperation with eventual parent company Disney) has produced enough beloved stories and characters to rival just about any other long-running creative firm.

Back in March I had the opportunity to visit Disney/Pixar’s headquarters in Northern California (and the nearby Sonoma Raceway) to learn directly from the source about what went into making the company’s latest animated feature “Cars 3,” and why above all story is king. Presented below is a compilation of the best quotes, anecdotes, and lessons I took away from my visit to Pixar Animation Studios and preview of “Cars 3.”

“Animation is where we bring the characters to life, and try to get their personalities to come out through their acting. Animating cars, we’ve done it before in two other movies, so we basically asked ourselves at the beginning [of ‘Cars 3’], ‘What did we learn from those two films? What worked? What can we build upon and make better?’ Those two movies basically gave us a set of characters that we know and love, and then a set of rules that we created: ‘How to convincingly make a car talk and not have people be weirded out by that.”

“We also asked ourselves what kind of new challenges we were going to face in this third installment. We knew that we were going to get this story that was very emotionally grounded, so our animation really had to live believably inside the detail of this world. In terms of animation that means we had to pull back a little bit from big, broad, cartoony movements. Because these are several-thousand-pound cars and they really needed to work in a more realistic physical way.”

“We want these cars to behave like cars. We don’t want them to be squishy [or] rubbery-looking. We want them to be steel, various metals, plastic. In the world of ‘Cars,’ materials and shapes help define [the characters]. For [the first ‘Cars’] movie we designed [the character of Lightning] McQueen to make every other car on the track look outdated.”

“Flash forward to today, ‘Cars 3,’ McQueen is the centerpiece of the film, so of course he’s back and better than ever in his classic race trim with new graphics and a new sense of purpose. We also needed to design McQueen’s rival, a next-generation racer who could push McQueen to the brink of extinction. So we asked ourselves, ‘What would a racecar designed in McQueen’s league look like twenty years into the future?’ Voila, enter Jackson Storm.”

“We basically take the concept art from the art department, and we’re the department that pulls it into the computer. We do digital sculpting, digital shade and painting, and digital rigging articulation, which is basically setting it up like it’s a puppet to get it ready for animation. We’re doing all of this so that the animators can really focus on the acting and the personality, and don’t have to worry so much about the mechanics.”

“When we first started ‘Cars 3’ the first thing we did was look at all of our old research and old cars [from the previous ‘Cars’ movies], and bring those over. Our software for ‘Cars 3’ is so advanced that we have to model actual reflectors and bulbs and lenses so that the light actually bounces through our lights correctly and behaves accurately. We didn’t have to do this for the previous films. We actually had to upgrade a number of our old characters.”

“It’s really exciting to see now, this many years later, how the whole [‘Cars’] world has evolved, [with] several films and Cars Land and everything else. We approached this film like we approach all the films at Pixar. It always starts with something that’s visually tangible. This is the beauty of computer animation, and this goes back to the first short we made, ‘Luxo Jr.’ which came out in 1986. John Lasseter saw a desk lamp on his desk and he saw this new medium of computer animation, and wanted to make something that would feel like you could reach out and touch.”

“This has just evolved over the years, until now we have ‘Finding Dory’ that comes out and you can practically smell the salt in the air. It’s wonderful, and this is something we’ve done in really all of our films. But the thing about making something that’s visually tangible, it’s really always rooted in something that’s emotionally tangible. It dives down to that spot in all of us that we can really relate to.”

“In effects, we’re primarily responsible for all the natural phenomena you see in the world– all the water, fire, smoke, sand, dust and debris– anything that our characters are interacting with and kicking up as they move along in our very realistic world that we’ve constructed for ‘Cars 3.’ In this film we’re really where the rubber meets the road. All that tire smoke, all the skid marks that get left, the little tire marbles that get kicked up, that’s all work from my team.”

“Our work is so important to this story in particular [because] my team is providing this believable interaction that really grounds our characters to the world. There’s a sense of something tangible happening as they take hairpin turns [or] they blast through [a] mud puddle at sixty miles an hour. And that’s sort of the visual component of that physicality and that tangible realism that we’re going for in the film. If we do that really really well, then from a storytelling point of view, we can help create emotional stakes for the characters.”

“The mantra ‘Story is King’ affects every single department at Pixar, including the technical ones, and it affects us all in significant ways. In its most obvious form, ‘Story is King’ means that story is the most important aspect of our movie. Everything that Bobby’s animators are doing, everything that Jon’s effects artists are doing, it’s all in service of the storytelling. If the explosions are ever too big, or too cool even, we have to tone them down, because we’re distracting away from the storytelling and the acting.”

“We can also lose legitimacy in our storytelling if the world, and especially the stakes, don’t feel real enough. We’re trying to make the world feel as real as possible. This grounds the story and grounds the acting. [It] grounds everything for us. But to be honest, we don’t want photo-real, because photo-real is not the most aesthetically pleasing. It’s not always what’s best for the story. What we want is directed realism. We ground the world as much as we possibly can, but in the end we build a whole other set of tools to make sure physics doesn’t get in the way of the storytelling.”

“We knew it was going to be a tall order. When we last saw McQueen, he was on top of the world. He’s a champion, he’s got a great life, which is good for him, but not good for us from a storytelling standpoint. Our immediate problem was making sure that he had a problem. We wanted to make sure that we created a believable and authentic dilemma for him. You want to create an underdog situation, no matter how big and popular the character is.”

“We [started] to explore this concept of the aging athlete. If you look at ‘Cars 3,’ it’s the third act of the ‘Cars’ story. When McQueen was young, he was fast, he was brash, he was cocky. he didn’t need anybody to tell him anything about anything. He had the answers. We wanted to tap into that, because [through the first two movies] he had become a different character. He had become an older character.”

“We inherited this terrific structure, this great story, a character that had a great dilemma, and some side characters that were doing really well, but weren’t necessarily focused enough to push Lightning McQueen into where he needed to be with his flaw of trying not to age gracefully, essentially. And so our first job was to try to focus a side character, and that became Cruz Ramirez.”

“It was very difficult to crack her, and we tried a lot of different things with Cruz. She was just a pure techie and a superfan and an assistant, and none of that seemed to push McQueen as hard as we wanted to push him. She was always smart and she was always capable, but never quite meshed. And so we put ourselves on the task of focusing her a bit more, and what we ended up with is a personal trainer who treats McQueen like an old guy. And it’s exactly what he doesn’t want to hear.”

“[Voice actor] Cristela [Alonzo] was great. It was clear what McQueen needed her to be, but we wanted to know ‘Who is she? What’s her own thing? McQueen aside, who is Cruz?’ And Cristela’s personal story was helpful. She talked to us about trying to break into comedy, how tough that was to look and sound different than everybody else at the time, growing up in a small town with low expectations placed on her and having to try to exceed that on her own, dealing with confidence stuff.”

“I started to read up on confidence in girls, and there’s a lot of research in the last few years about the confidence gap and self-limiting, assessing your own ability in a second and walking away, just assuming that you can’t pull it off. So we tried that with Cruz and we showed women at Pixar and I was actually really surprised to see how many of the women in leadership positions really identified with that.”

“We talked a lot about aging athletes [like] Kobe Bryant and Michael Jordan– what do they do when their legs aren’t as springy, and they’ve got young guys coming in? Do they crumble or do they learn to play as an older, more wiser character? We talked a lot about that, and how that might extend into a universal truth outside of athletics– the idea of persevering when you feel obsolete. And when you find those universal truths you think, ‘Well, maybe that is a story that needs to be told.'”

Disney/Pixar’s “Cars 3” will be released into theaters nationwide on Friday, June 16th. Comments Off on INSIDE LOOK: The creative team behind “Cars 3” offers a glimpse of Pixar’s visionary filmmaking process