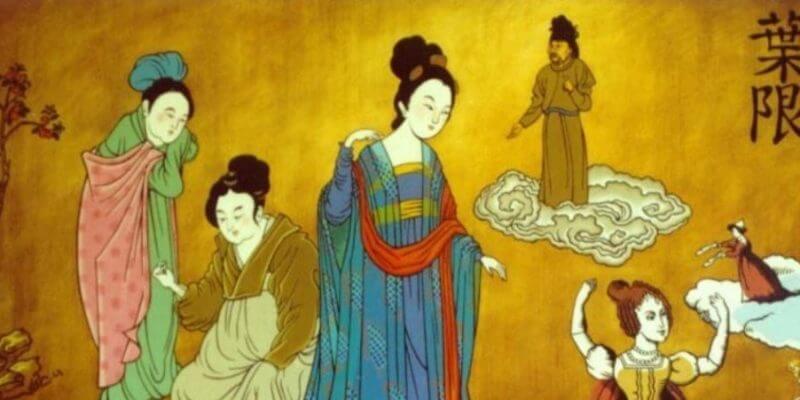 Many of Walt Disney’s animated masterpieces are not original stories but rather retelling and retooling of older fairy tales.

The Brother’s Grimm and others had crafted these tales years before the advent of feature films. “Cinderella” is one such tale that Walt adapted for his family friendly audiences.

This tale finds its roots a couple hundred years prior.  “Rhodopis” (7 BC) is tale that centers on a spectacular sandal taken from our heroine, by an eagle.  The king ends up with the wayward footwear and is fascinated by its style and the odd circumstance of its eagle delivered air-dropped arrival. He sets his men to find the owner and has her brought to him. Upon her arrival the two are married.

The aspect of sinister siblings comes into play in the 860 AD Chinese version “Ye Xian.”  Using the magical bones of her reincarnated mother-a fish, which was murdered by her stepmother and stepsister, Ye Xian crafts a fancy dress for the New Year Festival. When she is spotted by them at the party, she loses her slipper. Rescue comes from the King, having found the shoe, who falls in love with Ye Xian and takes her away from the cruel stepmother and stepsister. Similar, to the Chinese version, the Indonesian and Malaysian tales also attribute the magical element of the story to the mother-reincarnated as a fish.  In these versions the mother/fish is cooked by the sisters.  In this variation the bones become a magical swing and it the Prince who comes to the rescue from protagonists’ evil family.

The Philippines, Vietnam and Korea also have their own different versions of this tale of an abusive family, a magical plot device and an eventual rescue.  The Vietnamese version has the main character, Tam, murdered four times before she comes back from the dead and boils the step-sister alive.

The same story theme appears several times in the classic “One Thousand and One Nights” tales from West and South Asia. In British literature, the family cruelty theme again appears in “King Lear” and also, with a male protagonist, in “David Copperfield.”

The Brothers Grimm version of the tale has no Fairy Godmother; instead the Deus Ex Machina device is similar to the Chinese version in that a magical wishing tree emerges from Cinderella’s mother’s burial site.  A noted gruesome element in this story has the step-sisters actually severing their own toes to try to fit into a golden (not glass) slipper.  Fortunately this version did not make it into the Disney cartoon. The infamous pumpkin carriage and glass slipper element first appeared in the 1697 French version of the fairy tale, “Cendrillion,” written by Charles Perrault.  This fable introduces us to the name origin of the protagonist’s name “Cinderella.” Because she would sleep near the warm fireplace, she would awaken covered in cinders from the fire. In spite her step-sisters mocked with the name, “Cinderella.” This version of the tale could easily be the template used by Disney. “Cinderella” has appeared in theater prior to Disney’s classic.  In the 1904 stage version, Cinderella meets the prince in the opening scene, but mistakes him for someone else.  Of note, in this pantomime version, the Fairy Godmother transforms not only the pumpkin (into the coach), but also mice (as footmen) and a frog (as the driver) and rags (the ball gown) with a spell that ends at midnight.

In fairy tale, produced by Rogers and Hammerstein, has aired on television three times (with Julie Andrews in the lead) and on stage in London (1958).  Other theatrical versions include “Mr. Cinders” (1929) and the Stephen Sondheim musical, “Into the Woods.”  Numerous television and film adaptations have followed, including “Cinderfella” with Jerry Lewis as the lead character and the 2016 modernization of the tale,”If the Shoe Fits.”  Cinderella is also a recurring character in the popular television series, “Once Upon a Time.”

“Cinderella,” like many other Disney animated classics, has it dark roots in history.  The story has morphed over time to become the tale we know today.  It will be interesting to see if this “rags to riches” story continues to evolve as time goes on.