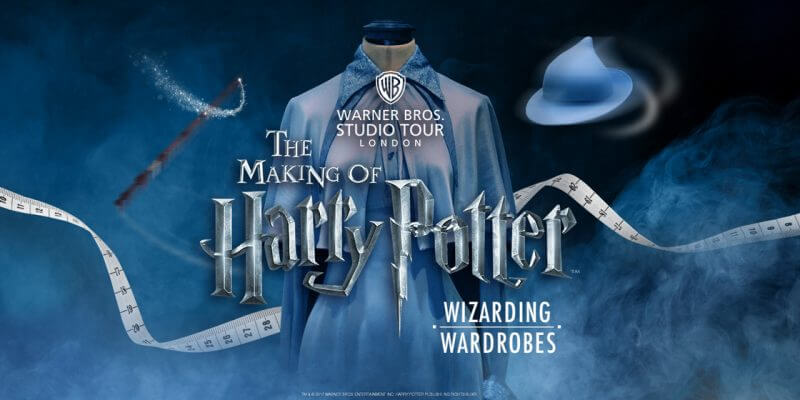 Harry Potter fans have a chance to see the costuming magic that went into the making of the films with a new exhibit at the Warner Bros. Studio Tour London — The Making of Harry Potter.

“Wizarding Wardrobes” features some unique pieces from more than 25,000 items that were created over ten years of filming the “Harry Potter” series. Over 600 Hogwarts school robes were made, and the exhibit includes ones worn by a young Daniel Radcliffe. Also included are Hermione’s Yule Ball gown, Gilderoy Lockhart’s elegant teaching attire, and Professor Slughorn’s lilac pajamas. Many of Harry, Ron, and Hermione’s costumes were already on display, but there are new additions joining the exhibit for the first time this summer. ‘Daily Prophet’ reporter Rita Skeeter’s 1940s-inspired costumes will be on display, along with designs for professors Lupin, Lockhart, and Umbridge.

The unique wizard hats created for Harry’s first trip to Diagon Alley are joining the exhibit, and guests can learn more about how the iconic Beauxbatons hats (pictured below) were designed. Three of Dumbledore’s robes will be on view, including one that was “damaged” during his epic battle with Voldemort at the Ministry of Magic. To find out the costuming movie-magic behind the robes, visitors can use paint, mud, and brushes to experiment with the costuming technique of “distressing.”

Guests also have the chance to step into Professor Slughorn’s armchair suit, which was used as a disguise to evade Death Eaters, for a demonstration of the practical effect used in the film. Actor Jim Broadbent sat in a special rig with his arms held out to mimic the arms of a chair, and the footage was later enhanced with visual effects.

Tickets are not yet available for July, but you’ll be able to book for Wizarding Wardrobes on the Warner Bros. Studio Tour London website.

Comments Off on Elaborate “Harry Potter” costumes on display this summer in ‘Wizarding Wardrobes’ exhibit at Warner Bros. Studio London