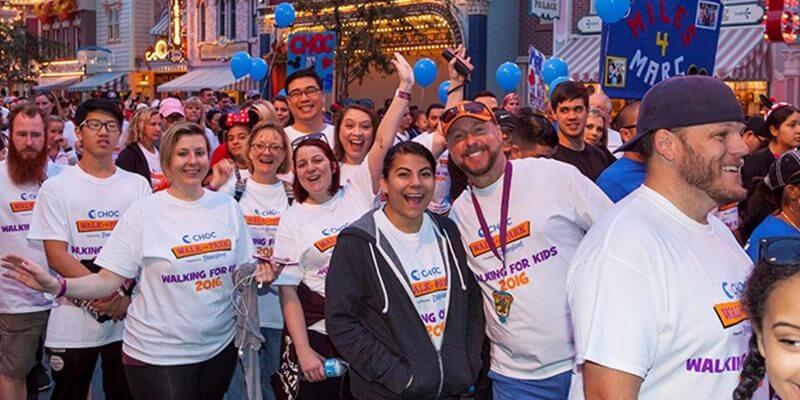 The Children’s Hospital of Orange Country (frequently abbreviated as CHOC) has been going strong since 1964 in the city of Orange, just south of Anaheim, California– best known as the home of the Disneyland Resort. For over twenty-five years of that time, the CHOC Walk in the Park has been raising money to support “a variety of patient and family programs, as well as education, research, and the development of the latest technologies to advance the health of CHOC patients.”

This year the organizers behind CHOC Walk in the Park were pleased to announce that the 2017 event will be held at the end of the summer on August 27th, rather than in the fall near Halloween, as has been the recent tradition.

Over the years, CHOC Walk in the Park has raised over $30 million and this year their target is $3,100,000. Disney describes the event as follows: “Participants in the 2017 CHOC Walk in the Park will enjoy a family-friendly 5K walk through Disneyland Park, Disney California Adventure Park and the Downtown Disney District. Along the way, you’ll have unique photo opportunities as some cherished Disney friends cheer you on.”

This week I had the opportunity to attend a preview event for this year’s CHOC Walk, and during the presentation the media received a first look at the new medallion and pin, available to participants at certain pledge amounts. CHOC Walk in the Park 2017 will take place during the morning of Sunday, August 27th at Disneyland. Be sure to visit CHOC Walk’s official website for more information and registration resources, and check out the Disney Parks Blog to join the Disneyland Annual Passholders team for the walk.