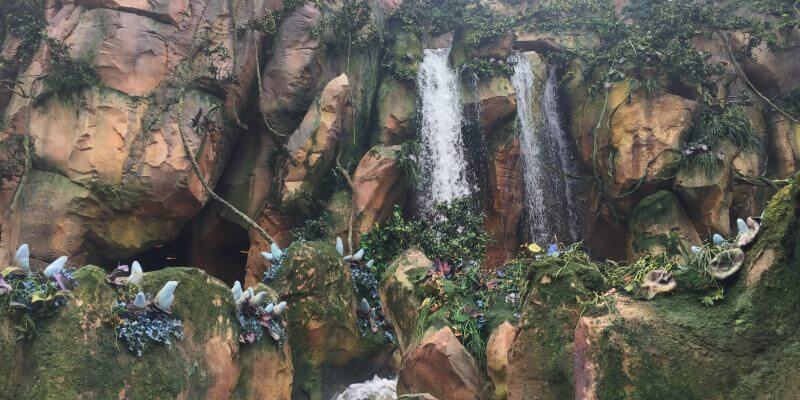 After years of waiting, Disney’s Animal Kingdom welcomed its first public guests into Pandora this past weekend for a limited time. Both Disney Vacation Club Members and Annual Passholders got their first look at the new area, and the response was overwhelmingly positive.

Disney previously gave the world a sneak peek of Pandora via multiple press previews, but this weekend marked the first time everyday guests had the opportunity to step inside the new area.

Prior to being let in on Saturday afternoon, the line to enter Pandora stretched far enough back that it nearly reached a separate land.  With a crowd that thick it seemed that Pandora might be overwhelmed by the onslaught, but Disney–being an expert in crowd management–handled the situation with ease.

It was a bit difficult to gauge how Pandora might hold up when its doors open to the general public later this month. Even though we have passed the time of media sneak peeks and Cast Member previews, the land still isn’t operating exactly as it will once it officially opens. For example, paper FastPasses to the land’s headlining attraction, Flight of Passage, were handed out to each guest this past weekend. Also, its standby line was being used as a self-guided tour of the queue only. These certainly helped manage the flow of guests throughout the area in a way that it won’t once Pandora comes out of previews, but even beyond that it was interesting to find the space easy to navigate without constantly feeling like you were bumping into someone in every direction. Signs of this came in other places like open walkways and quick-moving lines for food and drink. The Na’vi River Journey was open and operating just as it will come May 27. Even with its steady flow of guests entering the queue, the line moved at a quick clip, and the weight of the guest count was never felt. In truth, that could be said of most of the preview. Crossing the bridge to Pandora was something of a trigger for claustrophobes with its bottleneck effect; however, once guests hit the point of the land where it opened up to view the floating mountains and various paths that led to the attractions, the crowd was no longer an issue except for a few places.

Windtraders, the retail shop, was a bit tight at times. The line for purchasing the already popular banshee puppets was certainly of some length, and the line for the special PhotoPass opportunity was nearly as long as the queue for the attractions. In general, though, it was not difficult to maneuver throughout the area.

This might be one of the most encouraging aspects of Pandora – that the area is not only an incredible work of Imagineering with a layered story, breathtaking detail and E-ticket attractions, but it seems to also be able to absorb crowds well. There may be a large number of people in Pandora, but the crowd does not actually take away from your ability to enjoy it. With a land that captivates at every turn, entertains from beginning to end and absorbs a crowd without trouble, Pandora is already set to delight the masses that will flock to it once officially open on May 27th.