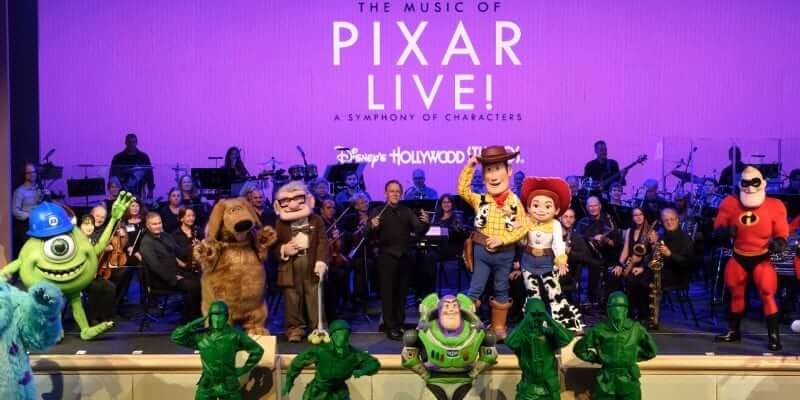 This summer at Walt Disney World, Pixar characters are taking the stage alongside a live orchestra for a series of concerts showcasing the moving music behind Oscar-winning films.

“The Music of Pixar Live! – A Symphony of Characters” at Disney’s Hollywood Studios will be performed from May 26 – Aug. 27 at the Theater of the Stars, featuring fun character moments and projected animated scenes together with a full orchestra. Musical selections performed live come from the soundtracks from films like “Toy Story,” “Monsters, Inc,” “Up,” “Finding Nemo,” “Finding Dory,” “The Incredibles” and “Cars.”

But don’t expect to hear just the hits. This concert is a deep dive into the beautiful scores behind so many of those emotional moments Pixar has packed into its films over the years.

This morning, a preview of the show was performed as the culmination of a 3-day press event for Pandora – The World of Avatar. Walt Disney World President George Kalogridis introduced Pixar director and Academy Award winner Pete Docter, who offered a few words about the orchestral performance before the preview began.

The full show will be around 48 minutes in length, featuring video segments with film composers and behind the scenes footage from Pixar, including orchestra recordings, story development, concept art and animation.

And there are more than a few character appearances as Buzz Lightyear, Woody, Jessie, Mike, Sulley, Carl Fredricksen, Dug, and many more Pixar pals join in the fun.

But the focus is strictly on the music, which is performed beautifully in the park. It’s a rare treat to have the opportunity to have such a live concert readily available at Walt Disney World, making this new show a must-see this summer before it goes away.

Showtimes will vary for “The Music of Pixar Live! – A Symphony of Characters.” Dining packages are available by calling 407-WDW-DINE.