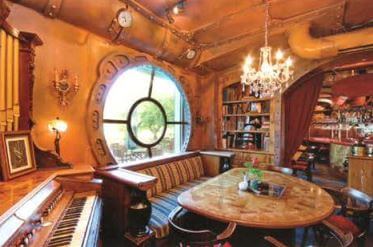 It’s almost as if Captain Nemo decided to retire and go into the hospitality business.  With a lavishly themed restaurant and well-appointed rooms, the restaurant is a must visit for any Jules Verne or steampunk fan.

Situated in on Germany’s largest island, itself a prime holiday destination, Rugen, is the coastal town of Putbus.  Within this resort town is a rather unique destination: U-Boat Hotel & Restaurant NAUTILUS.

The hotel has 14 captain suites, each accommodating up to 4 guests, within its two guest houses.  The rooms are well appointed with a light nautical theme.  Built in 2007, each suite has its own private, exterior entrance.  On the first floor, guests will find the living room and bathroom, with the bedroom upstairs.  Each suite has a private terrace.  All are equipped with a minibar and internet access as well as television and telephone. The real thrill of this hotel is its steampunk themed restaurant. “In the restaurant Nautilus® you will find gastronomy in the never-before-seen fantasy landscape of Jules Verne. Here you can dine, dance and dream. Following the example of the imaginative submarine of Captain Nemo from the novel “20,000 miles under the sea” by Jules Verne, an experience restaurant of the very special kind was created in August 1995. Deceptively genuine: down to the smallest detail the submarine- Backdrop of the Nautilus®. The guest rooms are divided into rowing and engine rooms, as well as captain’s fair. New since December 2009, Nemo’s “Indian” village has opened with 70 seats.” – U-Boat Hotel & Restaurant NAUTILUS website.

U-Boat Hotel & Restaurant NAUTILUS is located at Neukamp 17, 18581 Putbus.  Reservation information can be found on their website.  The restaurant is open daily from 11:30am.