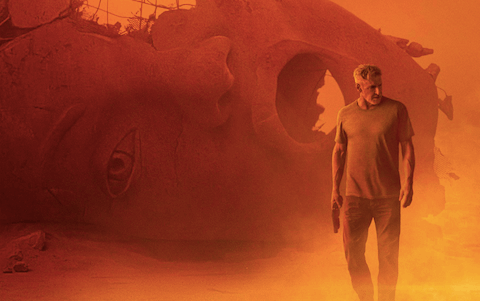 Gosling appears in stark contrast against white smog and stands alongside a very technologically advanced vehicle. Ford appears pensive, gun in hand, as he walks away from some ruins in a toxic orange haze. The sequel to the original “Blade Runner” film takes place 30 years after the other left off with a new Blade Runner, K. The story picks up the plot that was dropped and carries it through as K discovers a life-altering secret that could potentially ruin the world. He sets out in search of Rick Deckard, a replicant-hunting cop that has been in hiding for decades, so the two can come together to stop the world threat.