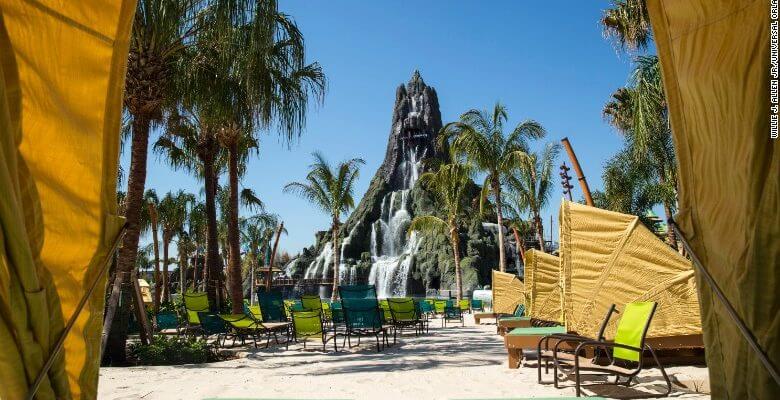 Universal Orlando’s Volcano Bay water park is finally opening next week on May 25, and a new sneak peek inside has arrived, delivering new details on what we can expect to see.

CNN was recently given exclusive access to the park, revealing the first photos of a few of its water slides from within the park.

Despite being just few days away from grand opening, the article reveals there are already plans for a 5-acre expansion for Volcano Bay. Dale Mason, Vice President and Executive Art Director at Universal Creative, tells CNN: “We have a pretty darn good idea of what we’ll do,” he said. “It could happen quicker than we think: it could start in three weeks.”

Details have also emerged for the Krakatau Aqua Coaster, which uniquely uses magnetic propulsion to move guests upward before sending them racing back down. Four passenger rafts are pulled up hills and around corners with magnets, meaning guests don’t have to climb a tower to get on the ride. Rafts ascend into the volcano, travel through passageways, and then pass through the waterfall. Of course, the centerpiece of the park is the volcano itself, called Krakatau. It boasts a 200-foot peak that’s part water volcano, part fire volcano. Each evening, the volcano will transition from waterfall to lava flow during a show that may happen multiple times a night.

The biggest thrill ride is the Ko’okiri Body Plunge, located on the back of the volcano. After a 70-degree fall through a drop door, guests slide 125 feet through the middle of the volcano. According to Universal, it’s the world’s first slide to travel through a pool filled with park guests.

The Kala and Ta Nui Serpentine Body Slides are nearby, which intertwine and carry guests through 124 feet of twisty-turny falls.

Punga Racer allows guests to race through the ride on manta-ray shaped mats.

The Kopiko Wai Winding River is the first saucer ride of its kind in North America.

In total, there are 18 rides in Volcano Bay including an action river rapids ride, as well as geysers and a Burping Tiki, which squirts water from its ears and burps when prompted by TapuTapu bands.

Head over to CNN for the full story with more photos.