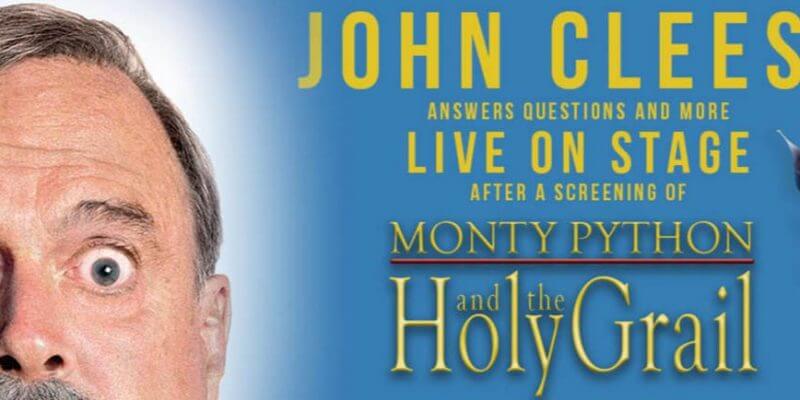 No one expects the Spanish Inquisition!  Nor did anyone expect to have another opportunity to catch John Cleese live on stage again.  The legendarily clever (and tall) comedian comes to Jacksonville, FL and Newark, NJ, this fall. This is John Cleese’s first tour since the successful and duly dubbed “a break before death tour,” which Mr. Cleese shared the stage with fellow Python partner and actor Eric Idle.  That very special entertaining and educational tour ended way back in the early part of 2017.  Now John has brought a new partner to the stage with him: a screening of “Monty Python and the Holy Grail.”  First unleashed in 1975, “Holy Grail” is probably the most quoted and famous of the troupe’s movies.  For those who have not seen this fine example of British humor – GET ON WITH IT! Evidently there are only two upcoming instances of this rare opportunity to catch Cleese on stage currently scheduled, both occurring this fall.  On Sunday, September 24, Mr. Cleese and movie will appear at the New Jersey Performing Arts Center in Newark.  Tickets for this show go on sale Friday May 12, via Ticketmaster.  This 3pm show will also have a limited number of photo op VIP tickets which also guarantee best seats in the house.

John Cleese will also be appearing, after a screening of “Monty Python and the Holy Grail,” at the historic Florida Theater, in Jacksonville, FL.  The show has one date of Saturday, November 4th.  Tickets for this performance range from $59 to $250.  Those $250 tickets are for front row VIP seating, and include a photo op with Mr. Cleese.  Tickets for the Jacksonville performance go on sale at 10:00am on Friday May 12, through the Florida Theater Box office.