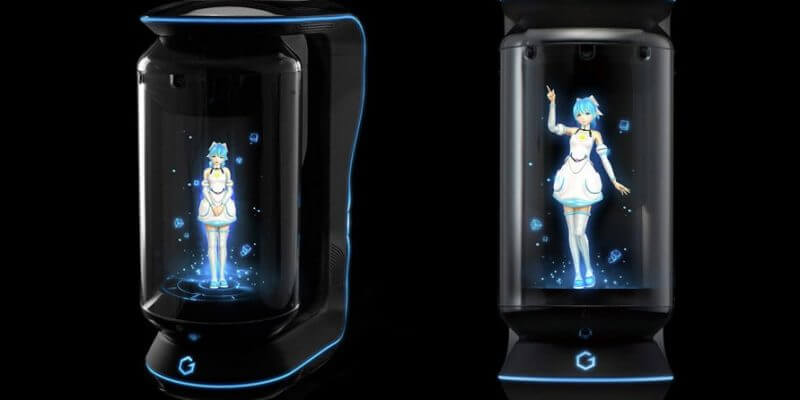 Artificial intelligence devices like Apple’s Siri and Google’s Alexa are pretty common assistants in the home. But now, a new device featuring a character named Azuma Hikari acts as both an assistant and a companion and brings the world of the movie Her a little closer to reality.

Vinclu, a Japanese company, created the Gatebox AI that houses Azuma Hikari. According to their promotional video, Gatebox allows users to “live with their favorite character.”

Gatebox has a built-in microphone and camera and can do many of the things that a standard home assistant app can do: control the lights and temperature, remind you of your schedule, serve as your alarm clock, and more. The character of Azuma, pictured below, and the way she interacts with the user is what truly makes Gatebox unique. She warns you about bad weather before you leave the house. She continues to interact with you throughout the entire day via text message. And yes, just like in Her, the relationship with Azuma does take a romantic tone. In Vinclu’s video below, you can see more of Azuma chatting with the user.

Right now, Gatebox is primarily being marketed as a companion that fills in the gaps between romantic relationships. But there may also be value in this kind of AI allowing people to “live” with other favorite characters. Who knows, perhaps someday Mary Poppins can serve as nanny for kids around the world via AI technology.

Bringing this technology into theme parks can also add to the overall experience. Instead of just selecting a Disney avatar on the My Disney Experience app, our favorite characters could literally be our guides throughout the visit.

If you’re interested in bringing your own Gatebox home, it sells for $2,500 and is currently only available in Japanese, though Vinclu is considering adding other languages. More characters for Gatebox are expected as well. Pre-order is available in Japan and the United States and is expected to ship in December 2017.