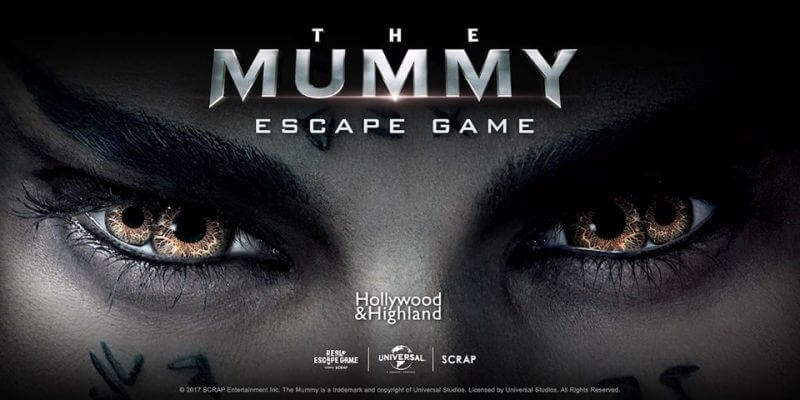 She’s escaped her tomb and about to wreak havoc on the modern world.  Your task to reseal Egyptian Princess Ahmanet, now a malevolent mummy, in her tomb before time runs out.

From the creators of the very first escape the room games, Real Escape Games, a brand new adventure unfolds in Los Angeles, CA, this summer. This horror/escape room tie-in arrives just in time for the reboot of Universal Studio’s “The Mummy.”  The opportunity to stop the ultimate evil begins the same day Universal’s horror reboot is unwrapped: June 9th.  In this high stakes adventure you and your team must unravel the puzzles to place this supernatural monster back into her sarcophagus before the clock runs out. On Tour: SCRAP’s Real Escape Room has two experiences that are currently on tour and are sure to delight anyone who loves fantasy video games.

As if that’s not enough excitement, Nintendo fans should be thrilled to take a stab at finding the legendary Master Sword and saving Hyrule Kingdom. Based upon popular video game “The Legend of Zelda,” “Defenders of the Triforce” is a travelling experience created by Real Escape Game and the .  The tour of this immersive video game puzzler has already made its way through the United States, but there are several stops left in Canada in June and July.

Real Escape Game Los Angeles is located at 123 Astronaut Ellison S Onizuka St, Unit 200 in Los Angeles, California.  The are open Wednesday through Friday from 7pm until 10:30 pm and weekends from noon to 10:30pm (closed Monday & Tuesday).  Additional information, including ticket purchases can be found on their website.

Comments Off on Escape Route: Recapture “The Mummy” just in time for Universal’s new film with an LA adventure from Real Escape Games