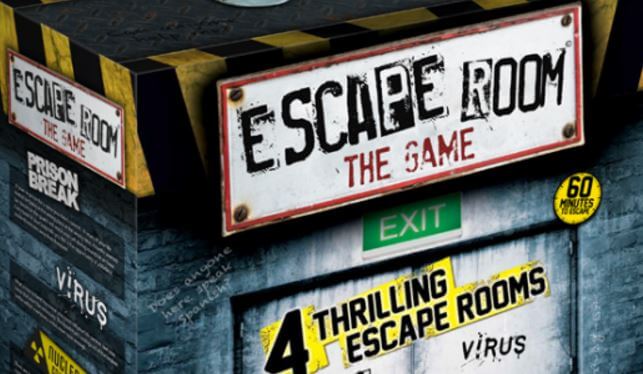 Don’t want to leave the house and still want that escape room excitement?  Looking for a new, interactive activity to enjoy with friends and family? Spin Master Games has the answer: Escape Room The Game!

The circle of life has just made the circuit for the escape room phenomenon.  What started as an at home single player experience with escape the room puzzle games like “Myst,” has evolved into a multi-player home game once again.  Escape rooms have been sweeping the globe since they first appeared in 2007.  There are now over 6500 themed, one hour, puzzle-solving experiences worldwide.  Toy company Spin Master Games has figured out how to take this group effort escape experience to the comfort of your own home.  Enter “Escape Room the Game.” The game consists of four different scenarios, a set of sixteen code keys and the battery operated “Chrono Decoder.”  Using the clues provided, player must solve the puzzles and decode the correct key sequence with the allotted time frame of sixty minutes.  The Decoder acts as both a time keeper and answer checker – plugin the wrong sequence of keys and lose a minute of your time; get the correct set of four keys inserted and the clock stops.  Players can play beyond the one hour time frame, but the clock will start counting in the opposite direction once 60 minutes have passed. There are four different adventures included with the game: “Prison Break,” “Virus,” “Nuclear Countdown” and “Temple of the Aztec.”  Each one hour adventure increases with difficulty as they are played though. These “rooms” are realized via a series of envelopes containing puzzles and clues. While each adventure is designed to be played only once, the website for Escape Room The Game includes downloadable materials for new players to play (with the same codes) as well as walk through clues and back stories for each adventure.

Another fun feature for the game is the mobile device application developed to enhance the experience.  All four original scenarios and the two expansion packs are represented in the application.  Designed to augment the adventure, the app serves background noise and music corresponding to the six different “rooms.”  In addition to ambient enhancement, another feature of the application lends itself to replicating the real world escape rooms – a selfie.  Each adventure has a matching frame to overlay the photo players take of their group when they solve a room. Escape Room the Game is available on Amazon for $28.90.