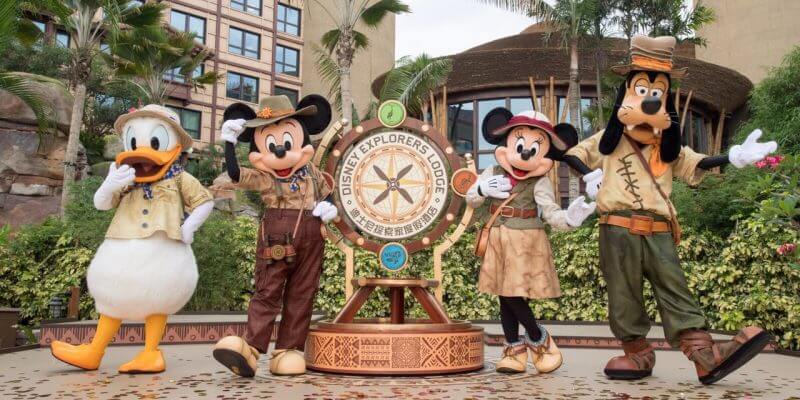 The new 750-room resort hotel is themed on the spirit of exploration, geared for guests who are looking for an exotic getaway while still experiencing Disney magic. “Disney Explorers Lodge takes the experience of a hotel stay to a whole new level,” said Bill Ernest, president and managing director, Asia, Walt Disney Parks and Resorts. “This architectural spectacular at the beautiful waterfront of Lantau offers to guests an exploratory journey to the exotic cultures of the world, in the unique Disney style of storytelling.”

The hotel features recreation, shopping, restaurants, and Disney themed entertainment, adding to the already vast amount of attractions in the resort.

The Disney Explorers Lodge also contains special features that can only be found at the Disney themed hotel. Guests can join Mickey and friends as they take an adventure in the new hotel, seeing more than 1,000 artifacts. Some of these treasures can be traced to countries from around the world, including Mali, Papua New Guinea, Bali, Costa Rica, Bolivia, the Ivory Coast and more. Exclusive merchandise can be found only at The Trading Post, an on-location merchandise shop. This store will contain over 20 exclusive items that can only be found at Disney Explorers Lodge hotel. Guests staying at the Disney Explorers Lodge can also enjoy four lush gardens that make up the perimeter of the hotel, enabling a scenic view of the ocean and fresh greenery. The gardens are themed after the cultures of Asia, South America, Africa and Oceania. Each garden is named after characters from Disney and Disney Pixar animated films. Priority admission for attractions and seat reservations for stage shows in the park are available for hotel guests. Each guest staying at the hotel is entitled to a pass, with a maximum of four guests per room.

The rooms at Disney Explorers Lodge are priced with nightly rates falling between the Hong Kong Disneyland Hotel and the Disney Hollywood Hotel, with a nightly standard rate from HK$2,200 (roughly $282).

Reservations and more information are available on the hotel’s website.