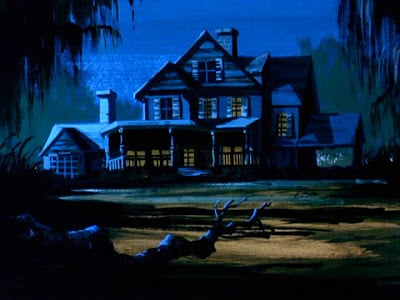 A cartoon is really only as good as its artwork. Great backgrounds can easily set the story’s tone.

Former Disney artist Walt Peregoy was responsible for rendering rich scenic art for backgrounds in the classic cartoon, “Scooby Doo, Where Are You!”  Peregoy’s experience at the Walt Disney Company included painting the backgrounds for “Sleeping Beauty.” His work was only on the first episode of the 1969-1971 series.  It set the tone and style for the animation team during the two years the show ran. These essential eerie and exciting illustrations gave the gang the creepy cool environment as they solved the mystery of the day.  Many of these fiendishly fun paintings could easily serve as magically macabre artwork for any creepy cool crypt or balance out an overly bright office cubicle. “Scooby-Doo Where Are You!” was creepy cool cartoon that ran on CBS from 1969-1971.  This first incarnation of the Mystery Gang of Fred, Daphne, Velma, Shaggy and Scooby was the evolution of a failed Mystery based cartoon that was deemed too spooky for children. Two Scooby-Doo movies, “Scooby-Doo” and “Scooby-Doo 2: Monsters Unleashed,” were released in 2002 and 2004.  The gang has also appeared in several video games and as Lego characters. An animated feature film is currently in the works.

Miss the Mystery Machine, Fred, Daphne, Velma, Shaggy and Scooby?  You can own your own copy of the original series on DVD.  It’s available, in specially designed Mystery Machine package from Amazon.com.