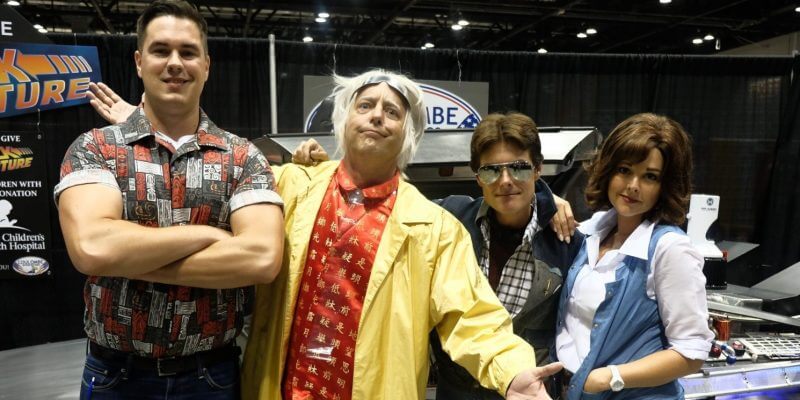 The time circuits were set, and Doc Brown’s DeLorean appeared on the scene at MegaCon 2017. The Give Back the Future exhibit debuted on the show room floor at this year’s event, serving as a source of entertainment and a charity fundraiser.

Working in conjunction with Universal Orlando, NBCUniversal and Amblin Entertainment, the attraction was a success and raised more than $4,000 for Saint Jude’s Children’s Research Hospital (with that figure still climbing, since they have not finished counting all the funds that it brought in). The creators of the “Back to the Future Experience” designed two very unique opportunities. The first was a photo op in which guests could not only get their picture with the iconic car but also interact with characters from the film.

Actors – a few familiar faces from Universal Orlando – played the parts of Doc Brown, Marty McFly, Biff Tannen, Lorraine Baines and Jennifer Parker throughout the weekend, giving guests an amusing time before telling them to “make like a tree and get outta here.”

The second opportunity was a whole other level and brand new experience. Guests choosing this option took a seat inside a replica of the DeLorean that came complete with flux capacitor. Once the doors closed, the passenger was treated to a digital experience in which they traveled to Hill Valley in 1955 and relived a portion of the original film. After it was all said and done, the time traveler was given a 360-degree video of themselves and their wild experience inside Doc’s DeLorean.

WATCH – DOC BROWN AND MARTY MCFLY GO BACK IN TIME:

WATCH – INSIDE THE BACK TO THE FUTURE EXPERIENCE AT MEGACON 2017: The experience is one that can be adjusted for future appearances with new, updated visuals that can change the scene in which the DeLorean finds itself, giving riders some options for their experience.

While Doc Brown is eyeing Wizard Con (coming to Orlando for the first time this August) for his next destination, there are no definitive plans on the calendar for the the experience to return – at this time.

Comments Off on ‘Back to the Future Experience’ unveils 360-degree time-traveling fun, while raising thousands for charity at MegaCon 2017