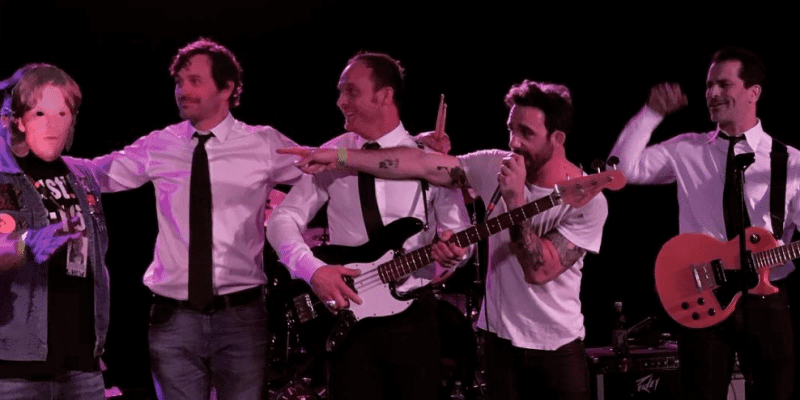 The Original members from ” The Wonders” (initially called The Oneders in the movie) Johnathon Schaech, Ethan Embry, and Tom Everett reunited at the Roxy on Tuesday night.

This was the band’s latest reunion since the 1996 film That Thing You Do! Tom Hanks (Mr. White), Schaech (Jimmy Mattingly), Embry (the unnamed bass player) and Scott (Shades) jammed out to the song.

The Oneders showed LA no mercy last night. Thanks for a wicked fun night, @joshadammeyers.

“I hate that song,” Embry recalled to EW of the track for the film’s 20th anniversary. “I remember it reached that point of, like, ‘I can’t play this song one more time.’” Still, Josh Adam Meyers, who facilitated the reunion for The Goddamn Comedy Jam, noted the performance was “magical” on his Instagram.

Steve Zahn (Lenny Haiz) was not present in the reunion performance, but the group did facilitate a stand-in, some guy who stood in the corner wearing a cut out of Zahn’s face.

The concert was posted to twitter by Scott with a link to The Goddamn Comedy Jam with Bill Burr. “Tonight at the Roxy their might be a little surprise for TTYD,” he wrote. He then appeared in a backstage photo posted to Embry’s account with the message, “When we reunion, we reunion hard.”

Los Angelenos!! Tonight at the Roxy their might be a little surprise for TTYD! fans…?https://t.co/wb40lcNpvV

When we reunion, we reunion hard. pic.twitter.com/qv9yM9vCt9

Comments Off on ‘The Wonders’ reunited at The Roxy in Los Angeles to perform “That Thing You Do!”