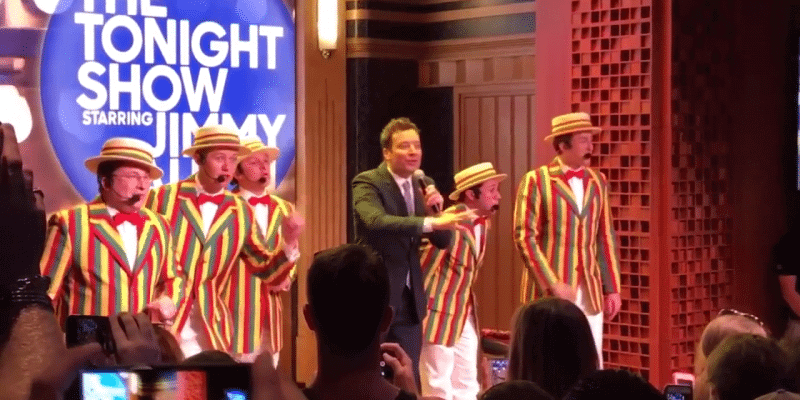 Jimmy Fallon has been taping episodes of “The Tonight Show” in Orlando this week as a lead up to the grand opening of the new “Race Through New York Starring Jimmy Fallon” attraction at Universal Studios. He surprised guests in the waiting area for the ride, where visitors can hang out in a replica of 30 Rock rather than waiting in a typical line.

Fallon used his musical comedy skills to perform some acapella with The Ragtime Gals, a group that makes frequent appearances on the TV show and entertains guests in the attraction’s waiting area. Behind the Thrills captured some footage of the impromptu song.

“Race Through New York” will grand open on Thursday, April 6 and is in sneak previews now.

Guests at Universal Studios this week can also catch tapings of musical performances for “The Tonight Show.” Acts will perform one or two songs on the Music Plaza Stage at 8:15pm.

Comments Off on VIDEO: Jimmy Fallon surprises fans by performing with The Ragtime Gals at Universal Orlando