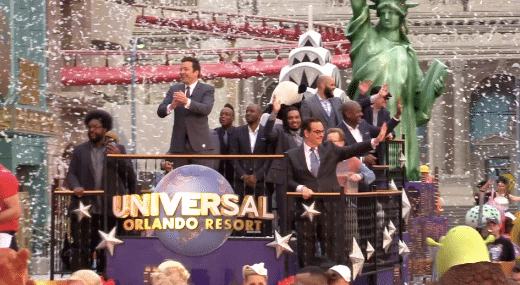 The whole affair started with a colorful and lively parade down the red carpet. Characters from various skits in “The Tonight Show” led the way while a large float carrying Fallon, The Roots, Hashtag the Panda and a couple others followed behind. After inviting his family to join him, Fallon was nearly giddy as he gave a small speech and cut the red ribbon, officially marking the opening of his very own attraction in Universal Studios Orlando. Fallon has been in town all week taping “The Tonight Show” along with a rotation of celebrity entertainers in anticipation of opening day, and what a week it has been! With Fallon making surprise appearances in the park alongside other entertainers, guests have been kept on their toes at all times. However, the big moment came this morning when Fallon announced with the enthusiasm of a kid at Christmas that his namesake attraction was now a part of the Universal Orlando Park family.

Race Through New York Starring Jimmy Fallon is actually a motion simulator that takes guests on an over-the-top adventure through the streets of New York, below New York Harbor, to the moon and back, following along with “The Tonight Show” host Jimmy Fallon’s wild antics. Many of the elements of the studio show have not only been incorporated into the attraction but also into the brand new concept of a “wait-less” queue.

HOW DOES THE WAIT-LESS QUEUE WORK:

The queue itself is so entertaining with its interactive game tables, live entertainment and plethora of “The Tonight Show” memorabilia that it could possibly be considered an attraction in its own right. The thing even comes with a character meet of sorts as Hashtag the Panda roams and takes pictures with guests.

The actual ride portion of the attraction is some strange cross between Mario Kart and a typical Fallon segment, but this time the audience participates in a racing challenge for the “Tonight Show Cup.” It all goes fairly haywire when the race goes beyond studio walls and out into the “big apple” and beyond.

WATCH SOME SCENES FROM THE ATTRACTION:

“Hilarity ensues” as special 4D effects add an unexpected touch to an already hectic experience, but it all comes together once again as winner takes all in an amusing conclusion.