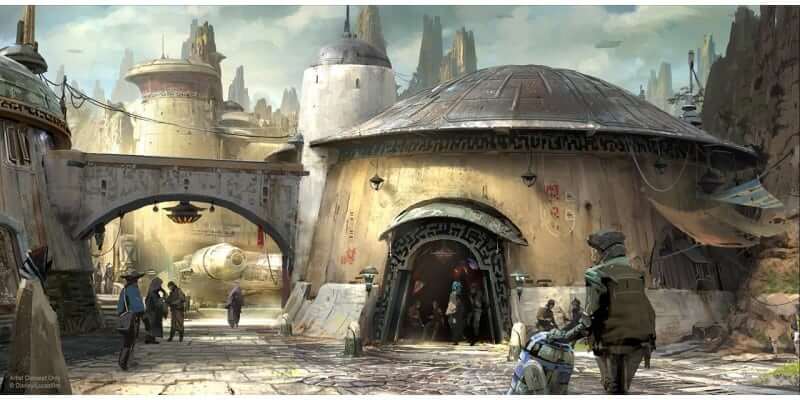 The panel for Disney Parks at Star Wars Celebration is in full swing as we speak. What we know is that the land we will experience in the parks is an entirely new one to the Star Wars universe. “We didn’t want to tell stories that already existed. We wanted to tell new ‘Star Wars’ stories in a new place, with the guest as the star,” explained one of the panelists.

What has been made abundantly clear is that Disney Parks is putting forth a lot of effort to give this land a rich history and lots of detail. Although having been around for thousands of years, this land in the galaxy is new to us as we find our own story to tell in the “Star Wars” saga. The mysterious place lies on the Outer Rim as a remote village that was once a highly-trafficked place along a busy commerce route. However, with hyperspace travel currently being the main mode of transportation, the village has fallen by the wayside a bit and is home to a less appealing lot who prefer to go unnoticed and avoid the eye of the First Order.

With all the detail that has been fleshed out so far, the new land is still nameless. Nevertheless, Disney Parks showed off some very impressive artwork during the panel. Take a look at what is coming to Walt Disney World in the next few years via some of the concept art that has been revealed.

NEW CONCEPT ART FOR CHARACTERS IN THE STAR WARS EXPANSIONS GUESTS WILL PILOT THE MILLENNIUM FALCON Star Wars Land is scheduled to open sometime in 2019.