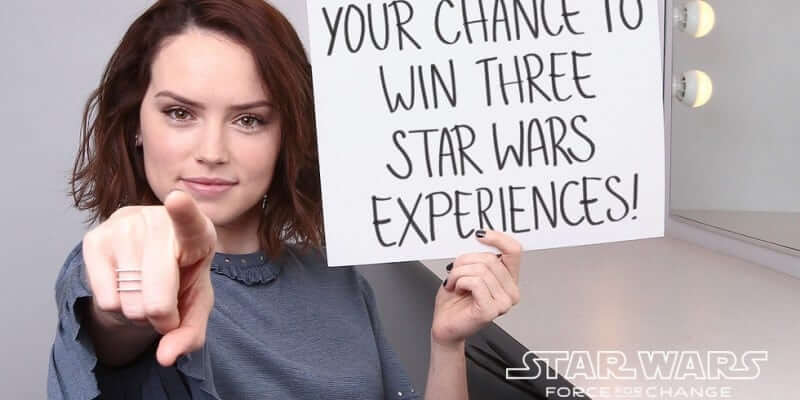 Star Wars fans can use their collective force to raise money for charities and win some really cool prizes in the process. Mark Hamill and Daisy Ridley announced the “Star Wars: Force for Change” initiative on Good Morning America today. In collaboration with Omaze the “Past, Present, and Future” fundraising campaign will benefit UNICEF and the Starlight Children’s Foundation.

The prizes up for grabs are a chance to appear in the upcoming Han Solo movie, tickets to the world premiere of “Star Wars: The Last Jedi,” or an overnight stay at the famous Skywalker Ranch. From April 11 – May 11, 2017, fans can enter to win here. Each week, a new randomly selected winner will be chosen.

“Star Wars: Force for Change” is a charitable initiative from Lucasfilm and Disney. Started in 2014, it was inspired by “Star Wars” fans and their dedication to philanthropy over the years. Starlight Children’s Foundation is the newest charity beneficiary in the campaign and their goal is to create moments of comfort and joy for hospitalized kids and their families. UNICEF has been involved in “Force for Change” since 2014, helping to improve the lives and wellbeing of children all over the world.

Watch Mark Hamill and Daisy Ridley give the full announcement below, and then get ready to do some good and win once-in-a-lifetime prizes.