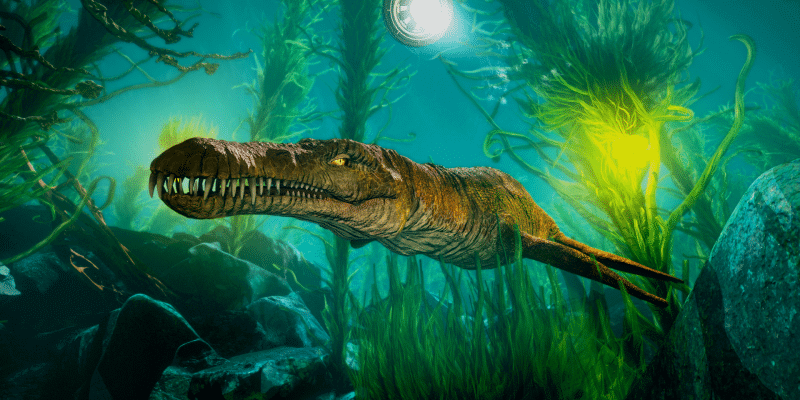 At a media event yesterday, SeaWorld Orlando announced the official name for their VR enhanced coaster attraction. The long-standing rollercoaster Kraken will be renamed Kraken Unleashed once it has been refitted with a virtual reality overlay.

In addition to getting a new name, the attraction is also getting a new icon. The blue and purple eel that has represented the coaster since its inception is actually being removed because it’s being replaced with a new concept for the Kraken, a female squid that protects the city of Atlantis.

New footage of the VR portion of Kraken Unleashed has now been released. In that footage, we find a host of mythological creatures that threaten passengers on the ride. Ultimately, though, the real danger comes when the Kraken confronts riders who venture too close to her guarded territory–Atlantis.

By incorporating Atlantis into the tale of Kraken Unleashed, SeaWorld has done something unique by overlapping two of their most popular attractions, Kraken and Journey to Atlantis. We had a chance to interview Brian Morrow, Vice President of Theme Park Development, and he told us about how the attractions will be interwoven as well as gave us a look at that new footage we mentioned above.

SeaWorld also introduced us to some new live entertainment that they will be debuting in the Orlando park. A show based entirely on bubbles called “Pop” will feature the talents of Bubble Master Fan Yang. Check out this sneak peek of the unusual things “bubbling” up that you never knew were even possible.