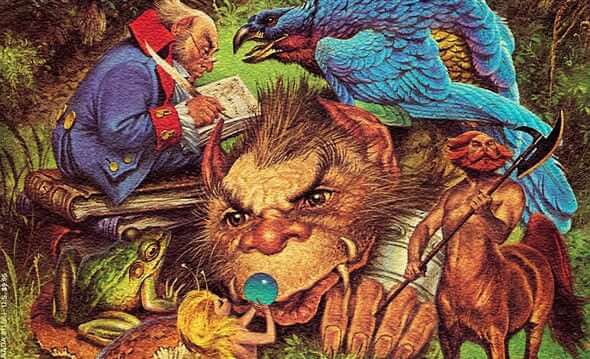 “A Spell for Chameleon” launched Piers Anthony’s magical Xanth novels some forty years ago.  Now, SP Entertainment Group plans to make them into a major motion picture and a television series.

Fantasy adventure meets whimsy and sarcasm in the long running series penned by legendary author Piers Anthony.  The magical land of Xanth and its realm of humans and mythical creatures (centaurs, demons, dragons, goblins, ogres, zombies and more) is focused on “talent.” Talent (or magic) can vary, by its wielder, as simple abilities, potent powers or half-talents (where that species must depend on another to use its ability).  This mix of magic and menagerie sets up the various story lines and characters in the long running series (which was originally only going to be a trilogy).

Another element in the bizarre and enchanting realm of Xanth is the “Adult Conspiracy,” which is designed to protect children.  Foul language, underwear, and “summoning the stork” are all forbidden to those under 18.  It will be interesting to see how this plays out in the film/episodes. At a pace of one story a year, there’s plenty of material for both mediums, especially if each book is its own film or season. The 41st title, Ghost Writer in the Sky (many of the series titles are a wonderful pun), was released earlier this month.  The next two titles (books 42 & 43), keep the puns (and adventure) coming: “Fire Sail” and “Jest Right.” No date has been announced for when production might commence.  The film/television series is currently in development stages which are being handled by Steven Paul (“Ghost Rider”) and his SP entertainment group.

Hopefully the Xanth movie and TV series will be as successful as the novels they represent. Other series, like “Harry Potter” “A Song of Fire and Ice” – “Game of Thrones”; “The Magicians” and “the Shannara Chronicles,” have made the leap from text to film. If so, there is more movie-worthy material from Mr. Anthony, specifically: “The Incarnations of Immortality.”  These seven novels spin the stories of Death, Time, Fate, War, Nature, Satan and God, or rather the “offices” of these incarnations.  Each office is, and has been held by several people.